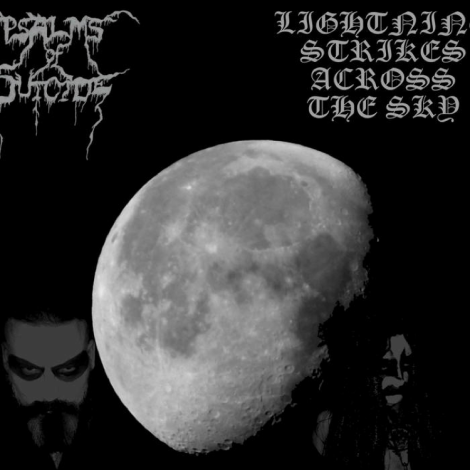 What drives you to write about yourself, your life, your thoughts?

It’s a question that was posed to me recently by my friend Haine of Antilife, an unapologetic trailblazer of French DSBM. If anything, I felt like he would be the one worthy of being posed such a question. But, perhaps for those who express their torture in less overt ways—i.e. hiding behind a computer screen instead of pouring forth on stage—the question is still fair game.

My initial response is that I don’t have a choice. My mom always said that there are can’t problems and there are won’t problems. Growing up, my teachers always mistook my silence as the latter, when really, there was very little conscious refusal involved. I lock up when I try to speak, particularly when awaiting my turn. Practice doesn’t make perfect; instead, I rush the performance to try to expel the nerves of impending exposure during rehearsal. The result? One jumbled mess. The scenario has only grown more tragic as I’ve skipped town. I’m left speaking an unholy pigeon tongue of Bmore and NOLA, further muddled by an Anna Nicole inflection acquired by the exhaustion that comes with having creativity delegated to the second shift.

So, it’s either write, or render my mind completely mute.

On the other hand, purging myself of the arduous thought-carousel of extreme introversion through written language is an act at which I have to actively work. The hardest part about any form of communication—regardless of whether or not it elicits a visceral flight response—is that the receiving end won’t reciprocate with the “right” words. Something I’ve come to learn about myself is that despite being a commie pinko, I do a hell of a lot of investing. I get my hopes up just to subsequently experience a letdown shutdown. As tempting as it is to fold, courage must be found from within in order to continue to assert yourself (while, of course, keeping an open mind) in order to help others understand your point of view.

Like with most revelations, this one comes with a backstory. I was hunched over my phone in the torn armchair of a coffee shop, the computer in my lap falling dark. Six months of what I had tried my best to bury six feet deep was being called forth to finally banish the haunt. I had tried to say it all in a phone call, but true to form, I sprayed it instead of saying it – tears leaving my words suspended in a thick fog. After I had hung up, the fog suddenly lifted, and all of my words fell to the ground. It was up to me to be brave, to reclaim my turn, to pick up the pieces and organize them into something coherent.

Today is an angry day. I admired my handiwork in the first brick of my text wall. I muffled my maniacal laugh, awaiting to have my number blocked for wearing the mask of the not-so-chill bitch I had been trying to avoid. I proactively scoured Craigslist to find a Carrier Pigeon to send my epilogue. But, a few moving hours and a few moving dots proved that my sour anticipation was unwarranted. I was, again, surprised, but this time, not letdown. There it was; signed, sealed, delivered – understanding.

As I moved closer to closure in one sphere of my life, I grew anxious at the sight of another –

my black computer screen. Hoping that all of the spinning plates would run on autopilot for a few more minutes, I tried to scroll through Instagram like I usually do when I want to keep the guilt of procrastination at bay. Yet, the words flooding my DM’s were a friendly prod to my motivation, like poking a dead body with the warm end of a roasted marshmallow.

I am so fortunate to have made so many friends in my two years of writing about music, with Count Suicide of Psalms of Suicide being one of the most beloved. Bound by the special relationship that is reciprocal belief in one another’s art serves as another key source of momentum in my courage to write. And so, in between bonding with my boy Déhà about our love of Lil Peep, it was my first instinct to congratulate the Count on his new split with Lightning Across the Sky before I even had a moment to give it a worthy listen. Suffice it to say, I wasn’t celebrating too soon.

Where the self-titled split succeeds is in its multifaceted approach to DSBM. Its moon-howling album art pays homage to Darkthrone, but unlike A Blaze in the Northern Sky, one song is actually distinguishable from the next. Hell, I eat my past words about splits. Collabs don’t necessarily have to tell a cohesive story in order to be effective. Sometimes they’re better served as samplers, particularly when a genre has an inaccurate reputation of singularity. There’s much to appreciate in those who can rope ’em in at the surface level, just to hold them hostage and to show them there’s more.

And, of course, thematically-speaking, there is an unlikely variety to be found in the void. Am I going to get up on the sad side of the bed today or the petty? Or, better yet, maybe I won’t leave my bed at all. Stay tuned to find out.

As I consider the box of tiny conversation hearts sitting here on my coffee table, defaced with a Sharpie-drawn noose, I can’t help but feel like I’ve uncovered a prime metaphor for DSBM, depression, and my egoistic self. We all come in different colors that cry through our words.

The first shade drawn from the box is Psalms’ interpretation of melancholic folk. Ultra-primitive, lo-fi, and vaguely-Viking, the album wastes no time in combatting black metal’s false pretenses. From fly folk to d-beat flavor to more of the dungeon synth moments we saw on last year’s Apex of Human Shame, little territory is left uncharted. As a result, Psalms’ contributions make for a fast read, increasing the accessibility of a brand of metal as moderately-paced as DSBM.

As Lightning strikes, a cool rain is released. Bass remains heavy and protruding, but carries a cleaner tone. Initial impressions may lead to the assumption that the rest of the album will play out as chill atmospheric beats, when really, it goes on to offer all of that and more. “Hands of Fire” possesses a funk to it, elaborating on Psalms’ classic d-beat and newfound symphonic tendencies alike. From there, we’re taken on a journey through the galaxy in which all of its colors have lost their youth. Interestingly, celestial stuff has been historically usurped by post-black, prog, and metalcore, but Lightning demonstrates that grittier projects have been leaving the starry sky untapped for too long. Finally, we have a go at what I’m coming to mentally refer to as pulpit vocals (an echoey speech that lies somewhere between a shout and a cry), reminding us that this is still planet DSBM, an autonomous death cult.

And so, as my now-silent room wears different shades of perpetually broken, I can’t help but feel as though life is just a box of tiny hearts. I may not know what color I’ll pull, but what I do know is this – I’m always expressed best when my words are worn on my sleeve.