Shudder is *the* premium streaming service for horror, and genre flicks and on July 14, 2020, announced that it has renewed its hit original series The Last Drive-In with Joe Bob Briggs for a third season to air in 2021. Shudder also announced a special “summer sleepover” double feature taped pre-COVID (seems like 800 years ago lol) that will feature horror director Adam Green (Hatchet, Frozen, Holliston) along with some other spooky guests. The special episode will premiere on Friday, August 14, at 9pm ET/6pm PT. Word on the street is that Shudder is also planning several Last Drive-In specials for later this year and on into 2012 next year, with additional details to come. 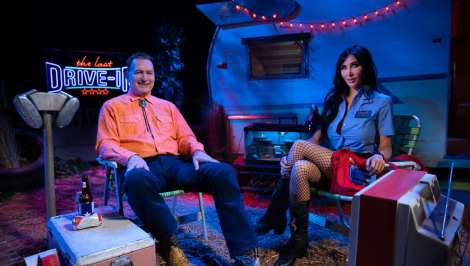 “I can’t believe it’s only been two years since that first marathon called The Last Drive-In,” said host Joe Bob Briggs. “To have a third season, and continue to experience the love and encouragement that daily pours out of the Shudder community, is more than I could ever have hoped for. It’s been a very difficult year for all of us, but I hope we can continue to be a little oasis where people come to celebrate holidays and weekends and that special family feeling that only horror fans know.”

In each episode, Briggs, the world’s foremost drive-in movie critic, presents an eclectic horror movie double feature, interrupting the films to expound upon their merits, histories and significance to genre cinema. Season 2 contained some true cult classics like controversial horror director Jim Van Bebber’s “Deadbeat At Dawn”, as well as Japanese masterpiece “One Cut of the Dead”.

Shudder and Briggs first teamed up in July 2018, for the 24-hour The Last Drive-In marathon, intended to be Briggs’ final farewell to televised movie hosting. Due to overwhelming popular demand, Shudder brought The Last Drive-In back as a weekly series the following year.

The Last Drive-In with Joe Bob Briggs is produced by Matt Manjourides and Justin Martell and directed by Austin Jennings.

Here in the graveyard, we stan the beautiful @kinky_horror and can’t wait to see what costumes she’s gonna whip up next. Slay, queen!