DIAG: Tell us who you are and what you do?

Feet: Hello, I’m Feet Banks. I do a lot of stuff but primarily I am a writer who sometimes gets out and makes shitty horror movies with his friends. I’m also the co-founder of the Heavy Hitting HorrorFest.

Chantal: HI! I’m Chantal Limoges. I am the Chief Operating Officer or better known as the Head Mistress Of Organized Chaos for Heavy Hitting HorrorFest.

DIAG: So what’s the deal with Heavy Hitting HorrorFest? How did you get started?

HorrorFest got started as a place to show our shitty horror movies. My buddy Chili and I were living in Pemberton, just north of Whistler, in 2002 and we wanted to use our cameras to make something awesome, a real movie. (We were making mostly action sports videos at the time and had just finished a big ski movie.) It was autumn and we were sitting around smoking weed and making pom poms for a costume party. Not sure if you’ve ever made pompoms but it’s super repetitive and being high helps. It also helped us come up with a movie idea, because Chili decided that pom poms are the least menacing thing in the world. You’d have to be really useless to get killed by pom poms. We wrote a movie right there, Green Jesus vs The Killer Pom Poms. It was stupid, the classic “kids go camping and shit goes awry” premise. But it had pom poms and a weed smoking Jesus that kicked ass. So we shot the movie out in the forest on mini-dv tape, spent two nights, cast it with our friends, rented a smoke machine and a generator and the whole budget was under $400 bucks. Then we edited it on the first generation of Apple iMovie and had a buddy help with a more complex sound edit. Everything was totally b-grade but our pacing was good and we had some good effects like a pom pom with a saw blade in it and a rubber severed head. The movie was 15 minutes and it was pretty killer. We wanted to show it to people so we started the Festival, originally called The Heavy Hitting B-Grade HorrorFest and asked all our other action sports friends to make their own shitty movies. We screened them all on Halloween, had a big party, gave away a trophy and the rest is history. 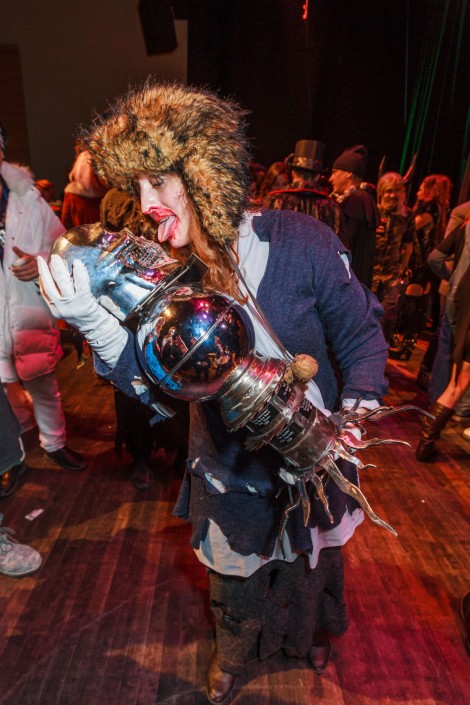 DIAG: This year’s theme is Apocalypse – can you give us some hints on what we can expect at the apocalyptic festival?

Chantal: Without giving too many secrets, the night is about filmmakers and the teams they gathered to create a movie. It’s about celebrating them and their movies (winner or not) with a killer party after the screenings and awards.

One of the best things about Whistler is that everyone goes all out with their costumes. This year’s theme allows for more apocalyptic style costuming. Think The 100 or Mad Max or Resident Evil. Every year the gala of costumes is elevated and it helps create this wild and inhibited energy in the room. Then sprinkle in a red carpet, a deadly photo booth custom built by Landyatchz, that could be anything like a guillotine or electric chair, music from Monster, a curated art show by The Incredible Amoeba, some badass trophies (like the Silver Skull Trophy) paired with cash and prizes from our amazing sponsors with a few other secrets were keeping locked away until the evening of, and you have a night of bloody spectacular fun.

HorrorFest is a true celebration of films, horror, art, and music. Horror is niche and that’s okay. We get to dance with the devil and come out on the other side more inspired then ever with perhaps a bit a blood on our cheeks. And were totally fine with all of it. In fact… we love it.

Feet: Other than that the main idea is the same, get a bunch of awesome movies, fill a room with people who worked on those movies and have put a part of themselves into what is happening, and let the good times commence. It’s always been important to us to make sure the casts and crews of the movies are able to get tickets to the fest before the general public. It makes the vibe of the night so much more fun when most everyone in there has contributed and participated rather than just spectated. 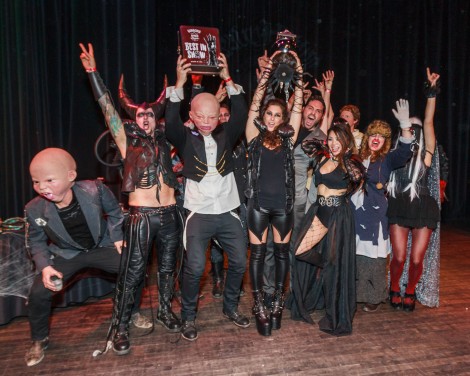 DIAG: What drove you to create Heavy Hitting HorrorFest?

See question 2. Other than that, I guess it’s just the drive to create and have fun. Chili was an incredible painter and artist so I think for him the looseness and collaboration of filmmaking was enjoyable. It also allowed us to tackle subject matter that we couldn’t do in his landscape paintings or my outdoor lifestyle journalism career.

DIAG: What kind of films can we expect at the festival?

It’s hard to know what to expect as far as the movie submissions go. I hope we get some nice post apocalyptic stuff but we really let filmmakers flex creatively so who knows what will come in. On the festival organizing side of things, we have a new venue that offers a bit more freedom for décor and special features so that makes it fun. I always expect to be blown away by a young filmmaker I’ve never heard of or an international submission that somehow matches our tastes exactly. I love that. 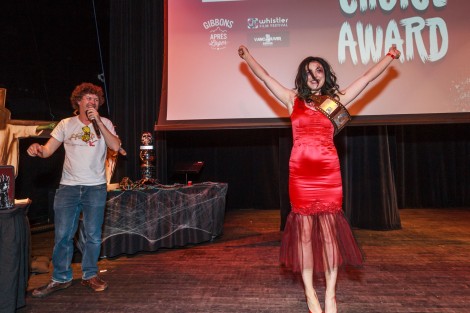 DIAG: Get out and do it. call your friends, bum a camera or use a phone and do it. you don’t need to spend a lot of money, just have food for people—Wieners and beans and gummy worms is good enough. I’ve made about 20 short films and never spent more than four hundred dollars. It doesn’t matter how well it is shot, or whether the acting is any good. If it looks like the people making the movie are having fun, and the idea is something cool, then your movie will be a hit at our fest. Another important thing is to stick to your vision, I always used to feel sorry for my actresses or actors because I’d have them running around in the cold mist all night, or in and out of the shower scene 15 times, and I would feel like I was wasting their time so I’d sometimes call it before I’d really gotten everything exactly as I wanted. This is no good, your friends and volunteers are out there because they believe in you and your vision. If you half ass it you are wasting their time. Get it the best you can, use them until you do. (Obviously, if you put in a bunch of work before hand and have an actual shot list, or storyboards and blocked shots, then you will spend less time figuring it out on set. So do that too). 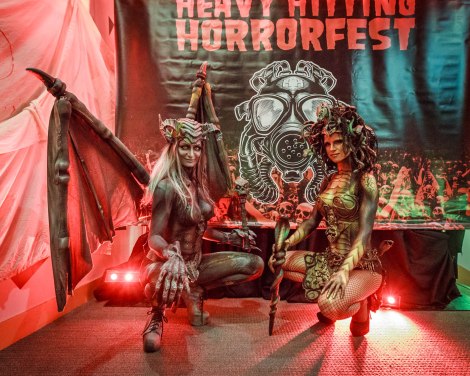 DIAG: What got you into horror in the first place?

I’m 43 and from the VHS era, and I grew up in a small town so for sure it was walking through the video section of the Laundromat at age 7 or 8 and seeing those epic horror video boxes for flicks like Chud or Piranha or April Fools Day or Halloween.

Tough one. I usually say the Exorcist because in 2000 when they re-released it I got to see in in the theatre and that is the only time I’ve ever had to lift my feet of the ground while I was watching a movie. I also love Carpenter’s The Thing, Jackson’s Dead Alive, and it’s hard to talk horror without mentioning The Shining, Kubrick should made another horror instead of Eyes Wide Shut. 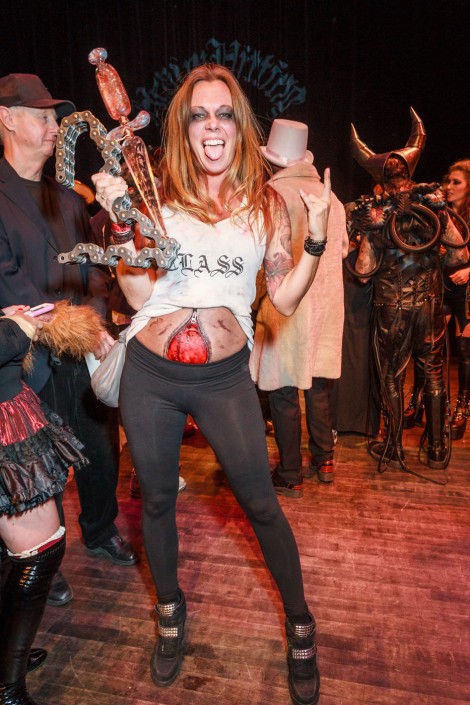 Does Mandy count as horror? Cause Mandy was fucking awesome. Editor’s note – it does, we screened it, it’s amazing There have been some really cool things happening in horror lately—more intellectual stuff like It Follows. I also like a lot of the stuff coming out of korea, The Wailing or Train To Busan. Also, it’s not that new but let the record show that Piranha 3D is a near-perfect monster movie.

DIAG: And lastly, our blog is named Drunk in a Graveyard and we are all about getting drunk and watching movies – do with that in mind, what horror movie / and drink or intoxicant combo would you recommend? Think of it like a wine pairing with a meal. And be creative.

This is a good question because we have always encouraged drinking at our festival, it helps with the heckling and general stoke of the night. In the old days it was Fireball all the way, Whistler liquor stores would run out of the pocket sized bottles of Fireball on horrorfest night, because there was no drinking in the theatre so you had to sneak shit in. Now though, I’m old and our audience has aged with me and if we drink fireball we all feel like shit the next day because it’s too much sugar. Maybe the changed the recipe but I can’t handle even a sip of that shit anymore. I think these days everyone is on tequila. Tequila soda is good because if you spill it on your costume it doesn’t leave a stain but it also fucks you up in a good, energetic way. I guess if I’m just at home I’m good with a bold red wine and a horror movie, or a nice hit off a pipe. Is there a sister site—high in a graveyard? 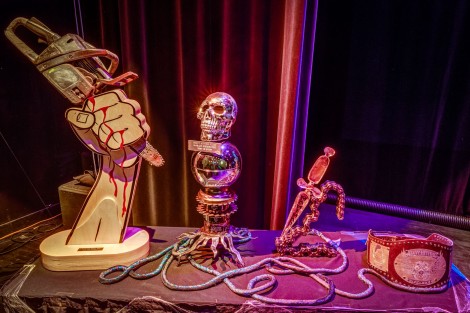 Any final words or pics or things you want to include:
I just want to say thank you for your interest and support. That’s been one of the best things about our festival over the past 17 years—it’s connected us with so many awesome like-minded, creative people who love horror and put in the effort to make awesome things. It reminds me of that line Rob Zombie’s wife says in his first flick, “We like getting fucked up and doing fucked up shit.”

For more information about Heavy Hitting Horrofest – you can check out the link here. Film submissions are due September 15, 2019, and tickets go on sale October 1, 2019.
The event takes place October 30, 2019.

Hope to see you all there.

Send us shmeckles on our Patreon.