This was originally posted on Strange Kids Club as part of the So Bad, It’s Good series of articles I contributed to to for a few years.

Picture if you will the social landscape of a mid-90’s childhood in the suburbs. Insert into this landscape two mischief causing monsters: the “Gremlins” and the “Ghoulies.” Where the “Gremlins” are the kids with a new Super NES, all the Power Ranger Zords and figures, and hundreds of Pogs, the “Ghoulies” are the kids with an old NES with only two games (one of which is Jaws), a handful of hand-me-down action figures from their older brother… and maybe a dozen or so Pog if they were lucky. 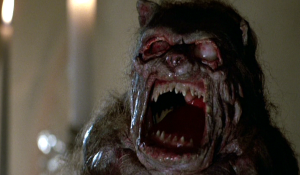 In short, the “Ghoulies” are the kids that were fine to hang around with when everyone else is away on summer vacation with their families and you were bored whereas the “Gremlins” were the rich kids EVERYONE wanted to pal around with, especially around Christmas when they got all the cool new toys from the Wishbook without fail.
Ghoulies is another blatant attempt by the ever-conniving Charles Band to, like many a b-movie producer/director, piggyback on the success of higher budget productions in the hope that people at a rental store will either mistakenly grab their movie thinking it’s the big budget version it mimics or, if you’re like me, have a taste for terrible schlock-fests and willingly go into the breach prepared for mini-budget shocks and scares.
This particular low-budget masterpiece tells the story of a hapless young man named Jonathan Graves who inherits his fathers mansion after the old man kicks the bucket. And what use is a mansion if it’s sitting their empty right? So Jonathon does what any responsible young man would do in his situation: moves in and hosts a rocking party. In the midst of moving into the mansion, Jonathon discovers his fathers old black magick texts (yup, it’s the kind of magick with a K, that’s how you know it’s the real shit) and quickly realizes he has an aptitude for it. 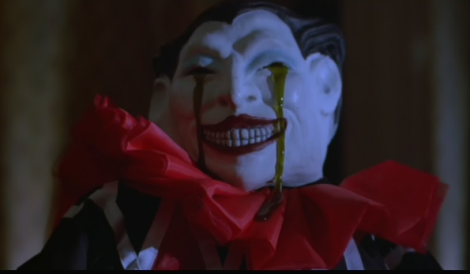 His skill rises quickly, to the point where in lieu of normal social gathering activities like board games and drunken flirting you may or may not regret come the morning, he summons the titular Ghoulies to do his bidding. Sounds like my kind of party! As one can imagine, this tipsy invocation doesn’t go exactly as planned or we wouldn’t have nearly as entertaining a train wreck to watch.
Yes, there should be more creature action for a movie called Ghoulies but the bits we are treated to are pretty amusing and worth wading through the crap and filler. Remember, this is a Charles Band movie we’re talking about here so expecting more than a C+ effort is foolish. Yes, the Ghoulies themselves are some pretty janky rubber puppets (I use the term puppet generously here) covered in slime… more than likely KY jelly.

Normally that wouldn’t fly but where else are you going to find a movie with a slime-covered demonic rubber puppet playing the piano? How about an eye-laser duel between two grown-ass men? Or a clown that bleeds green goo from it’s eyes before tearing it’s own grease-painted face off? I don’t see any of them making it into a movie these days do you? Plus, you know, black magick and satan worship never get old. If you’ve somehow missed out on Ghoulies, it’s definitely worth seeking out to bask in its rubber monster goodness.

You can send us beer money on Patreon