What’s going on eh? Today’s edition of Sloppy Seconds will take a specific look at releases by Canadian artists I’ve recently found lurking in the shadows of the used shops, waiting for a nice lumberjack to shell out some hard-earned loonies and toonies to take them back to their igloo. Since there’s no shortage of Canadian stereotypes for me to pick on, this intro will go on for a while if I don’t force myself to stop, so let’s just get this show on the road.

Overthrow – Bodily Domination (1989, Epidemic Records)
Well ain’t that fucking cool, finding Overthrow’s demo hanging out in a bin. Not something you see every day, so don’t mind if I do. Twenty minutes of surprisingly well-produced raging death / thrash, four of which were rerecorded on their sole album, 1990’s “Within Suffering.” It’s a bit looser than the incredibly tight performance on the album, but depending on your preference that shouldn’t necessarily be considered a criticism. It’s a shame they split so quickly, there was so much promise in their brief body of work. Fortunately, it’s pretty much completely available in the various vinyl, CD and digital reissues of the album that include the demo and a live set for all to enjoy.

Death Worship – Extermination Mass (2017, Nuclear War Now! Productions)
Death Worship sees the reunion of Conqueror masterminds J. Read and R. Förster, who join forces with Blasphemy bellower Nocturnal Grave Desecrator and Black Winds for a twenty-minute blast of total blackened death. I’d hardly call the project melodic by any stretch of the word, but its contents are certainly more immediately coherent than Revenge’s current output and cleaner-sounding than Conqueror’s “War Cult Supremacy.” Special callout to the wicked, grooving riff in the opening that repeats near the end of ‘Desolation Summoning,’ holy fuck. This is pummeling, relentless, and a fantastic amalgamation of all the various bestial, feral bands that its members have been involved in. I can’t imagine any circumstance in which “Extermination Mass” would disappoint any fan of the style.

Sure, only half of this is by a Canadian band, but a split alliance between North America’s shirt and pants is going to count for the purpose of this article. Black Witchery and Revenge were pretty much destined to be on a split together, the only shock is that it took this long to manifest. Neither band delivers any real surprises here, nor would we want them to; they’ve both perfected their little corner of the bestial black/death war scene. Black Witchery’s half serves up the churning blackened brutality we’ve all come to know and love, while Revenge’s half is dense chaos full of pick scrapes, shrieks and echoing grunts, their sole original song ‘Humanity Noosed’ sliding sleekly into a barbaric cover of Bathory’s ‘Equimanthorn.’ Most people who buy this will know exactly what they’re getting themselves into; suffice it to say that if you didn’t like either band before this split, this won’t do shit to change your mind. 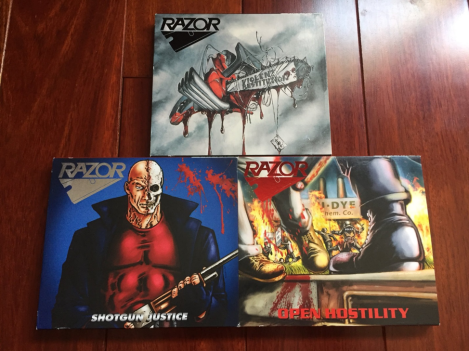 Razor – Violent Restitution (2015, Relapse Records)
Razor – Shotgun Justice (2015, Relapse Records)
Razor – Open Hostility (2015, Relapse Records)
Turn it up! A trio of albums from Canadian legends Razor is always a good time, and here we have reissues the way they were meant to be done. Impressively, Razor never lost much steam over the course of their eight studio albums, delivering slab after slab of hyper-aggressive Canadian thrash. “Violent Restitution” is a noble sendoff for original vocalist Sheepdog, but Razor didn’t miss a step with follow-up “Shotgun Justice” – Bob Reid may not be Sheepdog, but he holds his own and stays true to Razor. “Open Hostility” is probably my favourite of these three; continuing with the manic speed that Razor are known for, it makes use of an organic-sounding drum machine. The runtime for each disc is padded out with various live tracks, demos, and alternate cuts, and are all just gravy for Razor fans to dig into. “Shotgun Justice” and “Open Hostility” find themselves with refurbished artwork, which is not something I’m normally a fan of, but these are so faithful to the spirit of the originals that they simply enhance them. Well done, Relapse.

Well, that’s it for today. What do we always say? Don’t! Get! Eliminated!