Passing away in 1973, kung fu icon Bruce Lee’s death was the subject of much controversy, with an reaction to marijuana to a triad hit being suggested as the cause of death, when in truth it was likely far less exciting and involved an allergic reaction to some medication he had been prescribed. In the wake of Lee’s untimely death, a new sub-genre was born – Brucesploitation – and “Bruce’s Deadly Fingers” is probably one of the earliest, if not the first, examples of this particularly exploitative kind of exploitation film. A handful of actors, each bearing a varying degree of similarity to Bruce Lee in appearance christened themselves with new Bruce Lee soundalike names to capitalize on the hole left in the market with the death of the master. Bruce Le, star of “Bruce’s Deadly Fingers” and at least a dozen other films in the sub-genre was one such actor who decided to go this route, making something of a career out of it through the seventies and into the eighties. 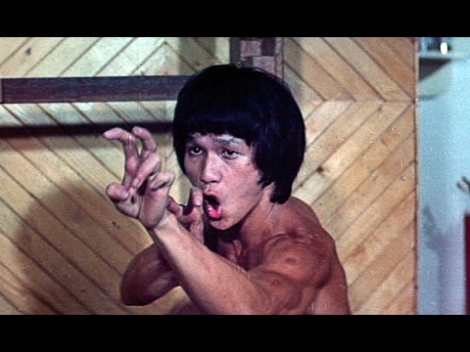 In “Bruce’s Deadly Fingers” gangsters capture Bruce Lee’s Ex-girlfriend for reasons that are never really made particularly clear because I don’t think they ever expected anyone to look too closely. Regardless, this kidnapping spur’s on Bruce Le’s character Bruce (subtle right?) to rescue her and the fabled Kung Fu Finger Book along with her. What’s the Kung Fu Finger Book you ask and why did the English dub need to say it over 25 times through the course of the movie? The answer to question two is that it’s fun as hell to say, while the solution for the first quandary is simple enough, though a complete fabrication, as far as I’m aware. The book contains Bruce Lee’s teachings surrounding a new hidden technique of his own creation – finger kung fu – which sort of just looks like all the other kung fu on display here, except with slightly extended fingers. Pretty sure this ISN’T what Lee invented, but who am I to question such a clearly well-researched film?

The movie is a fairly well-paced ninety minute ride, with fight scenes every five minutes or so because the filmmakers knew exactly what people were after here – ass kicking – and aren’t here to waste the audiences time. The kung fu itself is, as one would expect from a sub-genre of movies based exclusively on one man, not up to snuff when compared to Lee’s fastidious footwork. I’m fairly confident in saying that I don’t think you’ll be really paying attention to technique here (I sure wasn’t) and instead will be basking in the gloriously campy camera work and English dub they decided to strap this movie with. More out of sync than a giallo audio track, the English dub really pushes up the entertainment value of the film because without it “Bruce’s Deadly Fingers” wouldn’t be half as much fun. It would still have an absurd amount of high kicks in bell bottom pants though, so it wouldn’t be a total loss.

Back when I was a tiny little cult movie watching weirdo kid, I found this (and many other low-budget wonder that would warp my mind) movie on a ratty VHS in a bin at the local grocery store. Thankfully, the folks at MVD spent their youth digging around in those same discount bins, remembered this flick and decided to release a blu ray transfer of it. The transfer itself is as good as one could expect, crispt and with a surprising minimum of damage, mostly along the outside of the frame. Also included on this release is a whole gang of newly remastered kung fu trailers, deleted scenes for those who didn’t get enough of that Kung Fu Finger Book, and a feature length commentary provided by Bruce Lee and Brucesploitation expert Micheal Worth. Grab a copy here and prepare to learn the deadly finger kung fu style.

You can send us beer money on Patreon