My recent travels have landed me in a location fueled by fandom, passion for the Indie circuit and naturally the almighty dollar. It’s crazy here and I’ve quite the story to tell about my journey here, but that’s for another time suffice to mention my nerves are frayed and I’ve realized my one true hell. But, enough on that. I’ve been lucky enough to experience sights and visions I won’t soon forget. One of this I shall embellish upon a little further.
I give you…
As The Gods Will 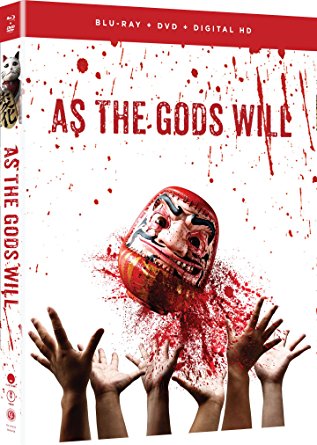 A Daruma doll, a polar bear, a traditional good luck cat, Russian dolls and other combined weirdness feature prominently in this WTF bizarro flick that’ll have you scratching your head and rewinding to count the number of head explosions. Seriously there’s more includedo here than in watching a days worth of Scanners, including the remakes and sequels.

Be prepared for this as it’s certainly not a film to be taken lightly, seriously or, I would suggest, even visuslly consumer ‘sober’.
But wait… I forgot to mention the popsicle sticks, love interests, treachery, and a slew of other elements those who often delve in far Eastern culture/mythology are sure to greedily lap up.
Influence here is varied, obscure, utterly identifiable in places and various and all meld spectacularly together to play out as a mixture of a live action anime, an adrenaline fueled childrens program and a number of films many might be able to name from recent Japanese cult past, including but not limited to Battle Royale and even Death Note.

In leui of dropping spoilers, for this is really an experience one needs to sit through, I’ll give this my recommendation. Be sure to lay your senses upon this as much like Visitor Q and a number of Miikes other features, which now number into the triple digits spread across a smorgasbord of genres, it will stick with you for a while. But even more than that it’ll make you ponder upon the creative forces behind its realization and creation.

Yea, it gets mighty strange in places.

How the bloody hell did they even think to come up with ideas such as this, and put them together in the manner they managed to? (Editor’s note:  if you really wanna piss your pants – Takashi Miike writes children’s books in Japan)  I’ve really no idea, I’m just here to enjoy the ride. And it’s a bumpy, wild one at that.

The Japanese artwork (not) at a store near you
Until my senses devour another chunk of celluloid worthy of reporting (it won’t be a very long wait. I’m sure),
Your slave to cinema obscure, unbelivably creative but truly unforgettable
-Cult