My Friend Dahmer has been in my sights for a few years now, ever since I first read the announcement of the film adaptation. I read the graphic novel from the strange yet delightfully named Derf Backderf years ago and immediately fell in love (I know, creepy right?) with the way he laid out the lonely and profoundly disturbed adolescence of one of America’s most captivating and disturbing serial killers, Jeffery Dahmer. Derf grew up with Dahmer, the closest thing to a friend the killer could probably ever claim, attending the same highschool and eventually running with the same group of weirdos. Well, sorta. I won’t get any more into it because that’s essentially the ground My Friend Dahmer covers. 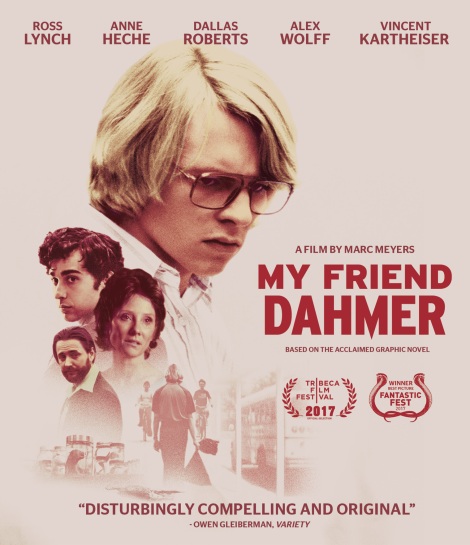 The film version was released last year and toured extensively on the film festival circuit. They really managed to stack the deck in terms of casting on this one as well with Anne Heche (Donnie Brasco), Vincent Kartheiser (Mad Men), Former Disney star Ross Lynch (Austin & Ally), Alex Wolff (Patriot’s Day) and Dallas Roberts. My Friend Dahmer is out on DVD and Bluray April 10th, with pre-order’s available now from MVD and Amazon. Keep your eyes in and around the Graveyard for my thoughts on the film before the home release date hits.