I’ve had Barricade on the ‘backburner’ for some time now. Its no wonder that I’d eventually get to it especially on account of numerous nods to it being ‘goretastic’ and far surpassing others in the same genre in regards to shock value, spilled claret volume and gore content.
The film commences with an excitable collective of middle-aged men next to a tent in theidle of mowheresville. The fun starts when a pair of them meander a short distance into the woods to urinate side by side (who does that? I’m surprised they aren’t holding hands, to be honest).
Both are shocked when an assailant leaps from the greenery, knife in hand, to pull a Lorena Bobbitt (ouch!). When his friends cone to the realisation that he’s abruptly changed genders they panic and become fodder for the assailants grunting buddies. In short a fantastic intro that offers more blood letting and intestine manipulation than the last dozen genre movies I’ve seen combined. The film continues and by this point the viewer should have an understanding that they should either keep a bucket handy, grab a raincoat or turn the film off lest it offend their lilly white, unicorn sprinkled rainbow snowflake, sensabilities. Much like Violent Shit (created by another Germsn splatter wizard – Andres Schnass) this film bears very little of a developing storyline, barely enough of one to keep it engaging in fact, though oozes with stalk, slash and evicerate predatory themes. 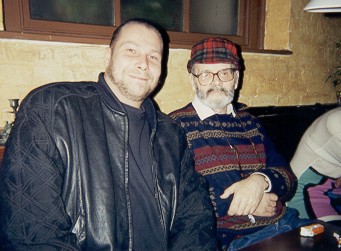 Timo Rose and Lucio Fulci. I only wonder where his influence may have originated. Let’s call this Exhibit A.

Barricade develops with three main characters, a love interest, international intrigue (if you consider child custody issues intrigue) and a family who steadfastly refuse to eat vegetables or fruits unless first being pickled inside of a host. Surprisingly enough, unlike earlier splatter films with much the same theme made in the same country, its easy to visually consume. Sure, it isn’t Oscar worthy (like I’ve ever seen La-La Land) but it does have appeal coming mainly by way of the characters interaction and on screen dynamics.

Raine Browne – Before we start…you aren’t by chance a cannibal, are you?

Raine Browne plays a damsel, who isn’t at all hapless, convincingly while Joe Zaso portrays a muscle bound type who oddly isn’t able to defend himself against an ailing (obviously ravenous) middle aged lady. The two have a sexual tension making up for the features obligatory love interest. Their companion, David (Andres Reissig), is a lovable pervy type who adds comedy to the overall affair and an inbetween-meals snack to the films antagonists (whoops – spoiler alert!).
Other characters are mostly forgettable, unless youre the type of viewer who rewinds for specific kill scenes and gore effects, and seem to float in and out of the films narrative at the oddest of moments without ever much of an explanation.
Barricade has its notable flaws, but if like me you enjoy this type of film, you can mostly overlook them. Some are glaring at times while others merely add to the overall enjoyment of the viewing experience. Personally I could have done without the over enthusiastic breathing in the soundtrack/score. I often felt like I was witnessing a cheaply dubbed porn (figure of speech, I prefer the more ‘elaborately themed’ type of adult faire, oddly some of which are Joe D’Amato’s finest works) but on further reflection realize this is a staple of Roses work, perhaps a trademark that will become better defined over time..?

Boasting a mere budget of $12,000 (which by todays standards is stunningly close to the same amount, unless you’re placing a down payment on a house) Barricade is a stunning example of Indy film making especially taking into account the calibre of acting within. The lighting is decent, the soundtrack is great in the mix and the editing isn’t at all too choppy, shit, Barricade even sports experimental moments. So, it’s no wonder therefore that Timo has collaborated with another German Splatter Guru, Andreas Schnass, in many of his other works, Unrated, Unrated 2 and Violent Shit 4.0, to great effect and rabid fan appreciation.

Part the fourth, but the question remains… which entry will take place in the outer reaches of space?

In conclusion, if you’re looking for a film to make sense, make you jump and get the gears turning in the ‘thinking department’ look elsewhere. However, if you’re up for some mindless fun and gore effects that will leave you gasping for air give Barricade a peek. Obviously it doesn’t stack up to The Hills Have Eyes (either version) or any entry in the Wrong Turn franchise with their lofty budgets but it does offer what they don’t (although, in all honesty, the Wrong Turn films boast surprisingly marks on the gore scale) which is over the top grisly effects, lots of them and Raine Browne. Have I mentioned that I believe she’s rather delicious, reason enough for anyone to become a cannibal really.
Your slave to cinema obscene, splattered in guts, loat in customs and more often than not forgotten in favor of larger budget opuses,
Cult