I was fully intending on being the Scrooge of 2017 year end lists, but here I am, a fool among men. No, I’m just kidding – the Graveyard’s Old Black Goat asked me to write one and I instantly said yes. At the end of the day, I’ve spent two years in this fantastic plot of rotting flesh because I love talking music. So, hell, let’s talk some more. I suppose the appeal of a clean, consolidated list outweighs the risk of any redundancy, and it’s always nice to give credit where credit is due.

Because 2017 seemed to be such a pivotal year in the careers of artists whom I very much admire, I would like to give some honorable mentions to Grift’s Arvet and Clouds’ Departe – two albums that take the kinds of risks I signed up for when I signed up for atmospheric black metal. So, please check out both of those cats if you haven’t.

Now, without further ado, I present my top six.

While we will be leaving 2017 with one less peep than we came in with, the sweetest marshmallows leave the stickiest trails. That explains why two-and-a-half months have passed and it still doesn’t feel real – I can turn on Come Over, close my eyes, and still see Lil Peep performing Save That Shit right in front of me. Peep’s peek has been preserved to ensure a legacy of a movement that applied a meta conscious to the beat of our emo nostalgia. Yet, while Peep’s image—marked by a gratuitous DADDY chest tattoo—may have been uber self-aware, his genuine kindness and overwhelming talent managed to touch hearts a layer deeper than many of his contemporaries. From odes to escaping lower-middle class malaise to falling down the rabbit hole of benz-drenched addiction, Come Over When You’re Sober tells the story of tried and true pain through the spectrum of postmodern Soundcloud production. I love you forever, Peep. Thanks for everything.

With October’s release of Reaper, New England emo trapper nothing,nowhere. continues the story of Sober through an aggressively more jaded prism. While Peep seeks salvation from suburban stoicism through romantic fairy tales and a fair amount of flexing, nothing,nowhere. provides a glimpse into the realities of cultural isolation. Reaper is a battle cry of rebellion against the Soundcloud realm from which n,n. initially emerged, invading the trenches of self-hatred and misanthropy that black metal once held monopoly over. Fortunately, with the amount of time n,n. has dedicated to the studio lately, 2017 has only birthed volume one.

While nothing,nowhere. provides a meditation on the grey area between love and hate, Bell Witch gifts us with a self-proclaimed journey into the grey area between death and life. As we are left to float in what lays on the other side of the mirror, Bell Witch is left to stew in the success of metal’s greatest feat of the doom decade – a one song, nearly 90-minute album. Fortunately, the Seattle duo seems to be finally garnering the attention that they deserve, topping the charts of year end lists small and large. Nevertheless, my selfishness speaks; enjoy your celebratory whiskey neat, boys — then it’s back to the recording dungeon to do your cultural duty *bangs scepter*

4) Psalms of Suicide – House of the Dying Self Terminating Sun

From what lingers in between life and death to the trigger that holds the power to sever ties with each side, Psalms of Suicide came onto the scene in 2017 with a number of full lengths, no-holds-barred vignettes about what lays below rock bottom, and one man behind it all. It’s hard to believe that House serves as Psalms’ inaugural siren song into the depths of DSBM, taking on well-patterned sampling risks, covering a number of drumming styles, and generally possessing characteristics of classic albums belonging to much more cultivated artists. While I hope there’s not quite as much to be sad about in 2018, I am excited to hear more chapters in Count Suicide’s book of misery. 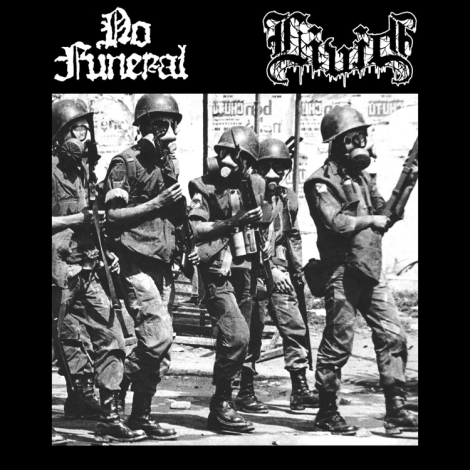 I’ve said it before, I’ll say it again – there’s something special going on in the Midwest. Out of fear of being chased through a cornfield with a chainsaw, I can’t say I’ve ventured across those parts myself, but I can get a taste from Minneapolis’ No Funeral and Livid. As per the recipe with any successful split, both sludge/doom circuits serve the as yin and yang, respectively. No Funeral can be described as carrying yourself along the sidewalk—both legs broken and chest open—just to have your heart strings tangled in the cracks. Livid contextualizes this misery within the ancient realm of ruckus, chaos, and persecution – all slowed down to the pace of a wagon wheel. Like I found myself doing in many instances in 2017, mourning is neglected in favor of inching forward, giving way to what unfolds, even if we may never be able to rebuild all that’s been lost.

In a bit more tender story of hope, Eneferens made some pretty tasty organic lavender limeade out of bitter fruits. After having the bulk of his equipment stolen, Eneferens wasted no time penning and recording an acoustic EP as a fundraiser for replacements. Other artists generally rush to Go Fund Me in the face of adversary—and, reasonably so—but Eneferens made sure to instantly give-per-receive in a much more meaningful way than an appreciative stick logo beer cozy. Tasteful, heart-wrenching, understated, and a record you could share with your dad on a long car ride without too much grumbling, Eventide is a brilliant example of how pain and melancholy can be captured without a single blast beat.