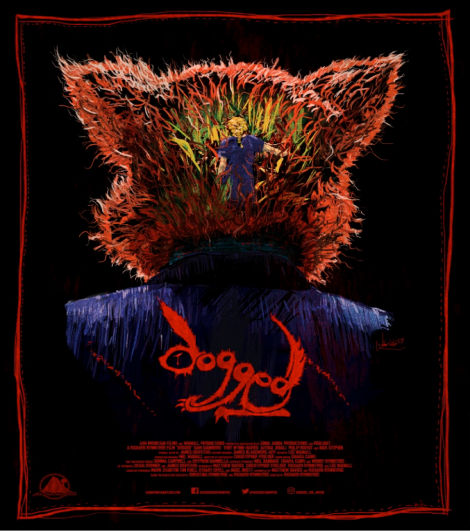 Close to two years ago I became very intrigued at the prospect and fruition of a larger scale feature upon witnessing an initial ‘micro short’ entitled ‘Dogged’. Even at this stage the story showed promise, especially bearing in mind the budgetary (it would be damn near impossible to purchase an operational used car for the price) and time constraints, a grueling eighteen-hour day, it was fashioned within.

I laid a few words to screen as to my pleasure of being able to review such an exciting short, an exciting take on a genre that has laid low for decades, though has recently resurfaced at the hands of the uber-talented genre sculptor Ben Wheatley. I played close attention to speak of the talent involved, it was far from mediocre in any way, and my enthusiasm regarding the production and creation of a feature length version. The gods be praised, thankfully the kickstarted was a huge success and Richard Rowntree and assorted crew were given the chance to tackle such a mountainous prospect.

Nineteen drafts and several months later Richard Rowntree and (co-writer) Matthew Davies attempted to tackle the implausible. As if the manipulation of a relatively slim, miniscule to be honest, roughly $20,000 budget wasn’t daunting in the slightest, the crew also had the temperamental British Isles elements to do battle with too, as anyone familiar with residing in that region of the globe can attest. Armed with enthusiasm and determination Dogged was sculpted in a mere eighteen days (plus a pick-up day a few months later) a testimony to the unfathomable drive of the Indy filmmaking community and confidence in the visualized final product. 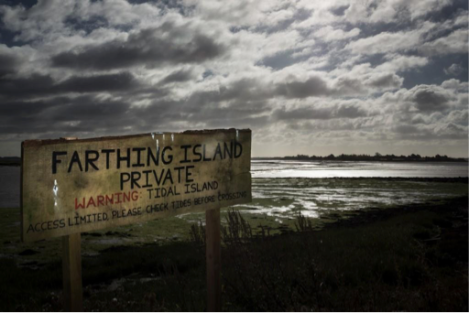 Dogged starts out by introducing a broke college lad, Sam, played by Sam Saunders, en route, homeward bound. His destination is one off the beaten path, with an egress controlled by the tides. Farthing Island is a seaside locale (which to the best of my researching ability isn’t an actual place but rather an amalgamation of woodland locations in and around Essex and Buckinghamshire both in the UK), that boasts a small, quaint, quiet, traditional, community lifestyle and…something else, lurking, beneath the surface of seeming normalcy.

Following a late-night rendezvous with an old flame (who is anything but “old” or on fire) Sam discovers that not all is as it seems, or as he once remembered it. Has his time away at University perhaps dulled him to the simplicities of the country lifestyle? Transformed him? His parents certainly believe so, and do their best to control his every move much as if his childhood hadn’t passed at all. Word gets out quick and as luck would have it Rachel’s (Sam’s “mate”) father is exactly that, white collar, crucifix, hymn books, religious connotations and all. But better yet he isn’t happy in the slightest. It isn’t enough that his daughter has been sullied (before marriage), in the backseat of a Korean SUV of all places, there is something, lingering, hanging in the balance, words unspoken. Sam soon learns some truths he’d rather not and his perspective on those surrounding him, loved ones, changes dramatically.

The word ‘community’ begins to be tossed around more frequently than an emasculated member in an impromptu game of ‘monkey in the middle’ (a Street Trash movie reference there for those that might have started to scratch their heads) and tension builds. People start acting different, odd, and character flaws start to make themselves known. Blunt idiosyncrasies set in, daggers fly from lingering glances and peculiarity takes form in the sudden appearance of woodland creature masked assailants. One even pushes poor Sam from his bike for no reason (bastard!).

Dogged rolls on at a delightful pace, dropping enough red herrings along the way to detract and waylay any who dare guess at where the menace originates, its meaning, and why it becomes more apparent as the film races toward its finale. Some elderly fellow (known ominously as ‘The Woodsman’) creeps around, and is seen lingering throughout many a scene. He’s even heard mumbling something about bad magic, although it could well be prose directed at the humble potato, or complaint directed at the cost of rice in China, it seems rather unclear until close to the film’s final stanza. What exactly is his role? I’ll not offer many spoilers, though I shall add additional intrigue to a storyline that’s played out and composed wonderfully. Blanketed by shots overflowing with idyllic landscapes the cinematography showcases a location untouched by the ravages of industry, an aura that overflows with beauty and nature untamed though seethes with underlying malevolence as too do the inhabitants.

The attention to detail in Dogged can be felt in every scene. Unignorably brilliant touches like experimental opening credits and various ‘flashback’ camera effects drenched in claret that add to an alternate reality vibe one invoking flashbacks likely resulting from a long history of abusing hallucination drugs. Meaningful out of focus camera effects add to the realization that the events that are transpiring are perhaps too much to fully comprehend. Lingering shots taking note of everyday objects brings the audience to bear on familiarity. Then there’s the refreshing lack of the much overused ‘jump scare’ element, worthy of the admission price alone. The whole affair is exaggerated applaudably by an excellently placed classic themed, somewhat traditional, score aided by exquisite utilization of both key and string instruments. Serene, peaceful and beautiful in moments, chilling when a scene demands and haunting in others overall suggesting homage to classic scores used with substantial results in the same genre (known lovingly as ‘folk horror’) such as, the recently rehashed Nicholas Cage helmed, Wicker Man and the timeless masterpiece Witchfinder General. 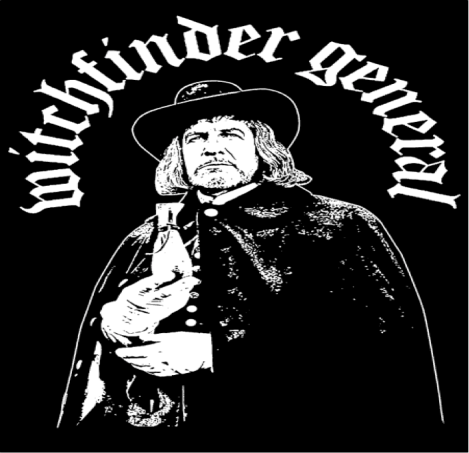 Much like in the aforementioned works many a dark secret is hinted at (in Dogged) but never fully revealed, characters have their expected role and the tension eventually builds oftentimes to a shuddering climax. Don’t expect, however, the ending in Dogged to be formulaic. Shocking, unique, twisty-turny and traditionally classic in theme are words that come more to mind. A collection of scenes that no doubt will be praised for some time and one that the audience will be wholly unable to predict based on events that have transpired and attitudes resulting from years of consumption of run of the mill features whose storylines are snoozingly bland and credits that roll around a narrative wrap-up that’s blindingly obvious to all but those who continue to finance such garbage.

So, the question remains should one actively seek out Dogged. In all honesty screenings should be easy to locate in the coming months, those responsible have their calendars marked off, overflowing with appearances. But, I hear you mumble, I haven’t yet answered the question. Seriously, as if my commentary and spoiler free review doesn’t lead one to assume that I’m anything other than a fan. I am. This is everything I had hoped it would be and more. Bravo! I’ve witnessed cinematic debacles that have squandered the entire budget afforded Dogged for luncheons sake alone. Dogged is at the very least a shining example of zero to next to no budget film making. A film that demands attention, sparks adrenaline into the indie genre and warranted of every accolade offered. So, yes. I guess what I’m saying in not so many words is…take time out of your schedule to catch a viewing of this, then give salutations to the creative team behind it. I’m of the mind they will more than appreciate it.

All that remains is my thanks to those affected by my lack of activity in transforming my thoughts on this into a cohesive article. Patience is a virtue, my strong suit on the other hand is procrastination followed closely by laziness, then my unfathomable lack of the proper handling of grammar.