Women’s wrestling is currently in a sort of renaissance. There are entire independent promotions entirely comprised of women, and the WWE has had an influx of super-talented wrestlers, and are featuring them more prominently on TV, even recently promoting a whole tournament to some of the best female wrestlers from around the world. Women’s wrestling has never been hotter in America, so it seems like an appropriate time to talk about a documentary about women’s wrestling called Ballerina I’m Not. I know this isn’t subject matter we usually cover here, but whatever. We get sent screeners… It’s a thing I watched, so I’ll tell you about it.

the original title was “Cease and Desist: The Movie”. Keep reading.

Ballerina I’m Not is the story of Francesca Zappitelli, and her journey to become a professional wrestler. It features footage from her career, as well as interviews with other wrestlers and promoters, describing the unique struggles involved in women making it in the business. It’s very clear that Zapitelli has a passion for the subject matter, but there are some problems with this documentary… pretty major problems.

First off, when a filmmaker puts themselves as the subject of their own documentary, it’s kind of hard to divorce the story being told from the person telling it. I’m sure that Zapitelli has a genuine interest in wrestling, but a lot of what was featured in the movie was a little misguided. I’ve been following wrestling on and off for most of my life, from low level indie promotions to the big time WWE shows, and I’d never heard of her before. In fact, after some research, the only record I could find of her in a wrestling match of any capacity were fetish catfighting videos, and a novelty burlesque-type company called Lucha Vavoom. There is absolutely nothing wrong with performing in either of these venues. It just makes the premise of the documentary a little muddled. I’m not sure if the story of the trials of making it in the world of wrestling is best told by someone who frankly only achieved perhaps the lowest possible level of success in the industry. 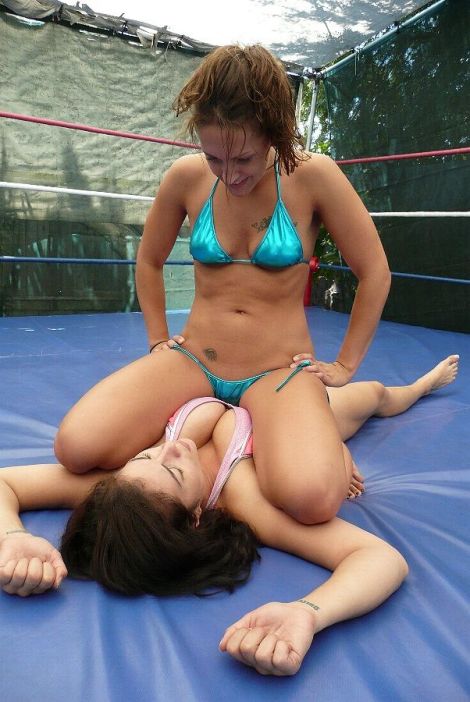 Not your usual WWE production values…

My other issue here is that the movie features interview clips from more established names in the industry like Stacy Kiebler and Maria Kanellis. These are 2 names a general fan might recognize, so it makes sense to state their involvement in the promotional material. The problem here is that these clips are pulled from other interviews having nothing to do with this movie, and clearly not conducted by Zappitelli, or anyone involved with the movie. I understand that this is frequently done in documentaries, but the source of the clips should be credited, and the promotional material shouldn’t make it seem like they were actively participating in the movie. I’m honestly not entirely clear either one of them are aware of their inclusion.

She did WHAT, now?

The movie does feature insight by Shelly Martinez, who is a former WWE and TNA wrestlier, and while it’s nice to have some commentary from someone who made it to the big time, Martinez is widely considered to be pretty awful as a wrestler. She is friends with Zappitelli, and worked with her on the catfight circuit, so that explains her involvement. Also featured is veteran independent wrestler Christie Ricci, who has actually put together a pretty nice career over the last 15 years, despite never making the big time. She is actually the high point of the movie, as she is someone who has clearly lived this life.

As far as the movie goes, it’s kind of all over the place. It describes the stories of Zappitelli, Martinez, and Ricci, while intercutting them with stories of groundbreaking female wrestlers from past eras. One of the subplots is that Zappitelli and Ricci are training together, but have conflict over Zappitelli’s legitimacy as a wrestler. They decite to have a legitimate submission fight, which ends in dramatic fashion. This all seems staged, which is fine for wrestling, but not so great when presented legitimately as the finale of a documentary.

I mean, It’s not entirely clear that this is on the up & up

Let’s also address the elephant in the room, here. It’s not discussed in the movie, but Zappitelli has a history as a pornographic actress. Again, there is nothing wrong with working in the sex industry, but it’s worth noting due to her involvement in the more sexual avenues of the wrestling industry, as well as posing questions about whether or not her ultimate goal was to be employed by a multi-national family friendly corperation. It’s unlikely that she would be considered for employment by the WWE, even if she WAS an extremely accomplished wrestler. There have been other extremely talented wrestlers with less checkered pasts turned away.
All in all, I’m not sure even fans of the sport would be interested in this movie. It’s probably too surface level for hardcore fans, and isn’t captivating enough for those with just a general interest. There are also major issues with the integrity of the project, as well as the pacing and presentation of the subject matter. I’m sure Zappitelli does have a real passion for wrestling, and while it’s commendible for a person to tell their story, the question needs to be asked if every story is worthy of documentation.

You can find Johnny feeling weird ways about stuff and watching wrestling on twitter.