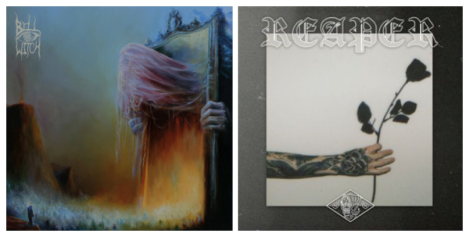 While the figure of the reaper takes physical form in bone, cloak, and scythe, it also prevails in the invisible atmosphere in the emotion that it conjures. The fear of death—or a decisive, irreversible ending more generally—is perhaps one of the most visceral, deep-seated components of the human condition. After all, what is it we’re really scared of in scary movies? Ultimately, it’s the fear or having the life being taken from us or someone that we love by a force that we can never fully understand. It’s a fear that we sometimes try to evade, but also chase. Despite the bitter irony, the fluttering in the chest that comes with being reminded of our own mortality is what makes us feel anything, if not somewhat alive.

While the humanist on a good day/nihilist on a bad in me takes issue with the idea that everything happens for a reason mapped out in a larger unbending reality by an unseen sky daddy, I do find profoundness in the very accidental ways in which the dominos fall. This past week, they fell particularly curiously. The reaper flared up in my life via my two favorite artists releasing two new albums of nearly identical names – Mirror Reaper by Seattle funeral doom outfit Bell Witch, and Reaper by Massachusetts emo-trap one-manner nothing,nowhere. Both records are feats for each camp in their own right, as Mirror is Bell Witch’s first stab at a non-stop one-songer a la Dopesmoker (1998), and Reaper serving as n,n.’s first full-length.

In a recent interview with Noisey, Bell Witch vocalist/bassist Dylan Desmond describes Mirror as “the gray area between death and life.” On the same accord, our obsession with the reaper falls somewhere in between conscious and unconscious – the grey area being the land we attempt to navigate as we float between the bookends of bright light. Reaper and Mirror Reaper are both indulgences of all the associated feelings that we’re taught to repress out of fear of being over-powered by the invisible, yet very real, forces that we have yet to understand. Yet, not all is lost in morose fog. Both albums leave you feeling content, at peace, laying the complexities of the deceptively unexplored human mind in the ground with your back ready to turn, your hand ready to release its grip on five bone appendages, and your feet ready to put one in front of the other once more.

Within the realm of metal, Bell Witch is a markedly gentle soul, but not one that has been spared from the similar stories of hurt that plague the genre. Where Bell Witch transcends these tragically typical narratives is not just by letting them unfold, but by allowing room to mourn, ultimately giving way to the two-piece’s remarkable healing power. And healing is a process to which the band has hardly been a stranger, having to cope with and carry onward despite a personal and professional loss larger than comprehension – the life of former drummer Adrien Guerra.

As a single song project, Mirror becomes an entire life of its own, depicting one stage that obscures into the next. A pang of a drum beat personifies the life event that jars us, followed by the reverberation of bass that represents our visceral reactions, which make fragile peace just as another pang cuts through. Bell Witch’s first time use of organs is tastefully crafted as their procession is led gracefully in-step with solemn atmosphere. Fifty minutes into the journey, we encounter the ocean-like tranquility of clean vocals, which become a fixture throughout our remaining time. The end of the nearly 90-minute-long venture personifies a common version of the End itself – the ceasing of voice at the mountain top; a tragic, but dignified death.

But, perhaps the fate of the soul being described is not as cut and dry as it first may seem. Desmond has linked Bell Witch’s work to ghost stories, which, of course, don’t have to necessarily be tales of fright told around the campfire, but rather a memorial of those our mind can’t bear to erase. With Mirror’s art in mind, it becomes clear that we hold this eating compulsion of wanting to know what’s on the other side. Having also buried a friend last week, this is a reality for which I can vouch. But, we can never know. We can’t place our heads through the mirror. All we have is this reality that is looking back at us. The choice, or at least the illusion of such, is ours; drag ourselves through the nihilism of the world, or dwell in the meaning we curate in our minds – the blessing and curse of being a conscious being.

Anyone who’s ventured onto SoundCloud in the past two years knows that riding the hazy near-death pipeline has become a narrative that’s no longer restricted to the fringes of metal. While you could make the argument that walking in the shadow of the reaper is becoming thematically contrived, this trend also points to a very valid reality; the number of hurt souls who had gone previously unnoticed as they’ve struggled to bob along the surface have finally found a platform to articulate what they hold deeply sunken. Regardless, nothing,nowhere. continues to divulge the details of pent up anger and melancholy through his one-of-a-kind blend of influences, even as whiners cry “sellout” in response to his recent feature in The New York Times.

Consistently concocting devastating blends of beats, strums, and samples, it is difficult to awaken the beast of Reaper without crying out in agony as the first few notes give way to “I swear that I’ma die in this basement.” “Houdini” goes on to tell the execution plan for the smaller deaths in our lives, such as the fear and frustration-ridden realization that irreconcilable differences of the mind yield better in permanent distance. While ghosting is often depicted as millennial cruelty, we are offered different insight as n,n. suggests that disappearing acts can also serve as a quiet, dignified death, silencing prolonged suffering. Meditative qualities heighten in single “Clarity in Kerosene,” which details the lasting resentment of a much more messier separation, which can only be extinguished through a good scream and some mental brain bleach.

Perhaps one of n,n.’s most expert examples of blending emo and hip-hop, “REM,” featuring a cool contrast of ultra-produced Lil West, details the complexities of dealing with the temporary death we encounter everyday – sleep. It’s intended to be a recharge within the arms of a manic world, silenced, that serves as the most relished, yet challenging to fully indulge, component of everyday life. Yet, sleep, too, can quickly become a ghost story as you dream of visions of what you seek to lay to rest. So instead, you stay awake. It’s perhaps in this sleep-deprived rage that you finally find the courage to break through the (cubicle) walls of depression to the aggressive soundtrack of “Skully” – an anthem of all of us who have tried to cheat the permanence of death by living the most rewarding life, just to have the rug swept out from under us by day jobs and self-hatred. The climax is entered through the finale, modern emo epic “Nevermore,” which defines the peace that comes with throwing your hands up once great triumph has fallen to greater trials.
Overall, while Reaper and Mirror Reaper have left me emotionally shattered, it is through the unique formations of these pieces that a new light is cast upon the ever elusive, but always present reaper. And for that, I am grateful.

You can find Jenna listening to black metal and wearing black clothes on instagram.

Tune in next week to Thirsty Thursday for more from Jenna!