Cult takes a stab at the realm of Electro/Retro/Darkwave Synth.

How to proceed on laying to page my thoughts in a genre I’m quite unfamiliar with, yet finding more intriguing as my explorations (no backpack or sleeping bags required) into unchartered territories happen on a more frequent basis. Perhaps I should mention genre films fueled by soundtracks which have often garnered my interest, rekindled recently with the music and conversations with the mind behind cult cinema inspired Werewolves in Siberia or the stunning release It Follows.

I would be remiss not to mention the unforgettable, feast for the senses, but annoyingly too short Kung Fury. Highly recommended if you have yet to savor the heavy homag to and the overall 80’s themed experience. Of course it’s difficult not to appreciate the genius behind its creation and the way in which it’s composed. In all honestyles Kung Fury is probably my favourite thing on the internet, that I can legally mention. 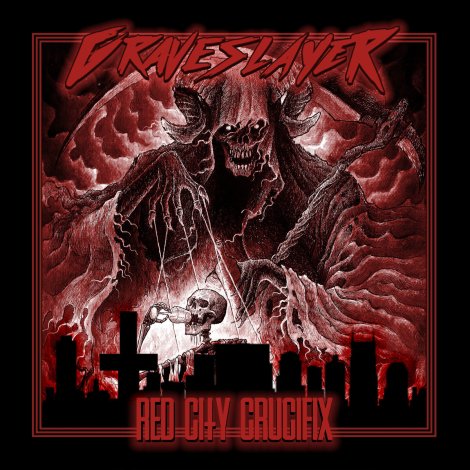 Admittedly it’s hard to know what to think of the music on offer based on the album’s artwork. Perhaps a work themed around everyday human sin, orchestrated by malevolent sinister forces, leading to ones eventual demise. The saying ‘everyone has a cross to bear’ is rather poignant in this instance. Either that or an 80’s power metal album with quazi-religious undertones especially in light of the albums art.
Seriously, there’s only one way to know for sure. And that’s to give this enigmatic thing a spin.
Tossed unceremoniously into the soundtrack of a cinematic landscape bearing titles I haven’t thought upon for what seems like aeons I’m left partially stunned as the opening seconds tick away. Truthfully this isn’t the type of music I would normally be found listening to, but I’m strangely drawn deeper in as the album progresses. Red City Crucifix’s initial aura is strangely ominous, though not too overtly sinister. Sporting an atmospheric festering darkness the albums initial track, Roborunner, boasts the potential to drag images from the depths of the listeners mind, to conjure a montage of dramatic scenes from a variety of films the listener may well have thought forgotten, cult celluloid with an unmistakable vibe all its own. The music meanwhile, a great mix of guitar riffs, drums and (dare I say it) something akin to electronic dance found in the more hip corners of the 80’s music scene, builds a narrative of its own. Rhythms chock full of unmistakable groove and atmosphere entrance as themes of strife/struggle, courage, dedication and perseverance bounce around in the listeners creative processes. Perhaps an intriguing love interest, or two (or six). A plot. Possible revenge, a miscalculation, back to the drawing board. The tension builds. One can almost see the struggle of the characters themselves as the beat dips, ebbs and changes, reaches its crescendo only to begin again as situations transpire and the storyline develops onward, outward. A great start which only leaves me more intrigued about what’s to follow and pondering upon my inexcusable ignorance of the genre itself. I’m awfully late to this party that’s for sure!
Dragonfist, the next track, sports more an upbeat aura, riffs even. Tainted by thick electronic distortion acompanied by surprising shades of Steve Vai esque applaudable intricate fretboard mechanic stylings. All accomadating a beat that much like the alluring pull of a gaping chasm you can’t help but want to traipse face first into. An early favorite.
If apocalyptic darkness is more your thing If it Bleeds will more than satisfy the cravings. Steeped in atmosphere it brings to mind diabolical elements and cinematic affairs telling of unholy ancient cavernous creatures rising from underworld pits to wreak upon mankind.

The Argento/Bava composed Italian classic Demons pops into my genre loving noggin and fits this impromptu soundtrack like a glove.
Hyper Alloy however, remains one of my favorite tracks on the album. Swift paced and exciting I find I can play it time after time and still find something I hadn’t fully experienced/picked out the time before. Varied drum beats plays an interesting part, a virtual drum effect layered over a machine gun barrage sets a dynamic pace that makes me often think back upon vintage Ministry, more specifically their The Mind is a Terrible Thing to Taste release.
The album climaxes on an upbeat note with the title track. Red City Crucifix is certainly busy with plenty to enjoy. Chock full of numerous directional changes, question and answer riff passages and galloping guitar driven rhythms.
An adrenaline rush toping off an overall interesting audio sojourn.
GraveSlayer have managed to compose an album that both delivers and surprises (admittedly somewhat of a virgin to the scene) fueled by surprisingly familiar instrument utilization to provide an experience that survives stagnation even after several listens.
8/10
Next up…
FaceXHugger (USA)  -Chasing Replicants
facexhugger.bandcamp.com
Independent
Release – March/14/2017

This album is of especial interest to me as it promises a listening experience bearing horror and sci-fi themes. Note the stunning artwork with a ‘Facehugger’ motif front and center on the releases cover. Would I be remiss in thinking HR Geiger inspired works play an influencial role here? Thought not. And based on the track titles a Harrison Ford fronted feature that isn’t Star Wars but features androids and menacing robotics nevertheless.
Chasing Replicants starts out on a firm footing with Tears in the Rain. Heavily electronic in tone, bouncy and energetic it conveys imagery of an active nature with sinister undertones, a great track to get one in the mood for a nostalgic 80’s sci-fi soundtrack.
Replicant has a highly effective Carpenter-esque feel much like if Warriors were set on the Blade Runner backdrop rather than in the city’s underworld/mean streets. Thus far in I’ve noticed that most of the tracks are of similar length, are blunt and don’t meander, unlike the prose of yours truly, and in doing so keep the listener keen and the curiosity piqued for the next track. Off World utilizes somewhat of a dream like intensity coupled with a frenetic uptempo vibe. It’s a track one can return to again and again with different opinions on its meaning each visit. Failure to Comply is an early favorite for me. It’s timing change partway through is unexpected and welcome adding another spark of energy to a track that already bears a throughly enjoyable and unique ambiance.
Who Am I, closer to the albums finale, boasts melodic intricacies and nuance hetherto unexplored. A stunning example of synth mastery, exploration, that could well grace an important portion of a movies score without detection. A track that conjures images of a quest for higher meaning against the ravages of time. Just me? Regardless, another instant favorite.
Colony the albums final track, incidently also the shortest, includes the only voice heard in the album’s entirety (courtesy of Aleks Marie) and places somewhat of an emotionally enigmatic stopper on an album that though relatively short is utterly engrossing and dangerously nostalgic.
9/10
Finally…
Werewolves in Siberia (USA)  – The Thing That Goes Bump in the Night
Werewolvesinsiberia.bandcamp.com
Fangoria Musick
Release – October/13/2017

One of my first experiences with the mind behind Werewolves in Siberia was many moons ago. Beyond the City of the Living Dead was, admittedly, one of my first reviews to grace the world wide web, my first foral into the synth realm and altogether an experience I will savor as one of my most pleasant in dealing with a musician. Chris C. is a wonderful chap, always willing to talk shop and strangely, especially in my case as I can be more than somewhat annoying at the best of times, never tires of talking influence and roots in the musical scene. His experiences as a musician are diverse and originate from a vastly different universe than the one in which he now composes. Under the WiS moniker his is a impressive discography. With many a release tainted by the unmistakable allure of the season in which a myriad of strange creation has been known to knock upon a door demanding delictable treats. Also worthy of note is a collection of tracks in tribute to the Misfits and also the composition/creation of a comic book soundtrack. The storyline of which revolves around a pizza deliveryman and his insatiable lust for carnage.

Yes…on all accounts this is a ‘thing’ which only makes me all the more curious still. Werewolves in Siberia offers what many a synth outfit doesn’t, no not free gummy worms at live events but rather real drums in the finished mix as opposed to the sound coming from a drum machine. The Thing That Goes Bump in the Night is no exception.
The albums introduction, its title track, is menacing, altogether sinister in fact. A fantastic opener that leads the listener into an environment laced with more than merely subtle nods to cult cinema of the past drenched in notoriety and controversy (for good reason).
Visiobs, the following track, tosses me back, grinning all the way, to the very first time I experienced Fulci’s Zombie. A wholly unforgettable experience accompanied by more than a suitable, chilling, soundtrack with the devestating unmatched potential to hammer home to the senses the cellulloid carnage, in vivid technicolor, on screen.
He Watches while you Sleep, rather than a song about everyones favorite favorite voyeur, the fat bloke who dumps packages in the dead of night, is near palpable in its intensity couple that with the unignorable creepiness of a familiar childhood ‘jingle’ and you have a stunning package that offers the listener an experience that is sure to bounce around in the skull cavity for some time afterwards. In my opinion a classic that will be revered for some time. The Chase is On, meanwhile, reverberates with an inventive howl effect that recalls choice scenes from John Carpenters The Warriors.
An unmistakable Halloween influence (not the season but rather the William Shatter masked killer movie that arguably launched Jamie Lee Curtis’ career) shrieks aloud in the Last Stand. The galloping pace effectuvely invokes various chase scenes (in which the killer never runs but always manages to impale his prey) and ‘jump scare’ moments that the audience, as well as the hollering characters on screen, would bet on but never be able to predict.

The final track overflows with intensity, atmosphere and ambiance. A fitting end to an amazing collection of tracks which is sure to put the remarkable finishing touches on an otherwise unforgettable trick or treat inspired fancy dress shin-dig.
9/10
Thats it for now folks, keep an open mind and try not to discount diverse audio before you’ve given it a real chance.
Your slave to audio extreme,
-Cult