Sometimes life gets in the way of finishing your article on time. Unlike Beyoncé, I am shit at making lemonade, so this week’s Friday Five will have to be postponed until next week. HOWEVER. I just watched a film that posed a direct challenge to my eyes and guts, so let’s talk about it, shall we? 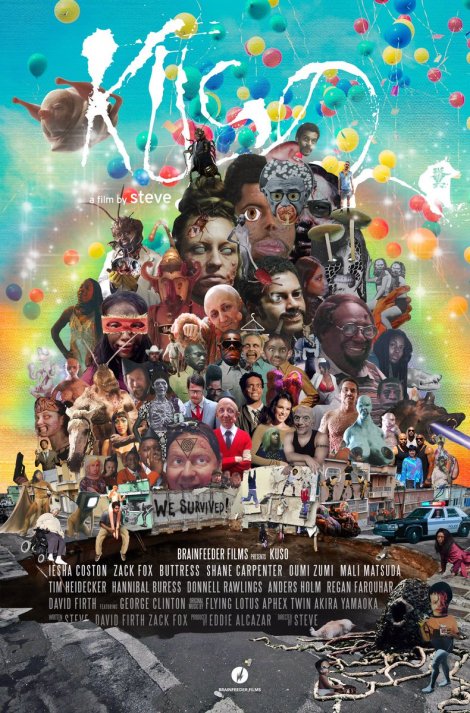 Kuso is an independent body horror comedy film directed by music guru Flying Lotus and dreamed up by the likes of himself, and the master of spoop – David Firth (of Salad Fingers fame). It stars George Clinton, which is just awesome in and of itself. The soundtrack includes spoopy music extraordinaries Aphex Twin and Akira Yamaoka. Still with me? Of course you are. How could this not intrigue you?

Now, in my last article, I complained about the lack of substantial POC representation in horror films. Well, I just got my ass handed to me with this film. This cast was dominantly black, and it fucking delivered. I’m not sure this was the answer I was looking for, but, I’ll take it. Plus, apparently, when it premiered at Sundance in January of this year, roughly 20 people walked out during the films viewing because they were too disgusted. That, to me, is an accomplishment. Most of the time.

I’ll be honest, I can’t even begin to explain to you what this movie is about, so I’ll just tell you what Wikipedia says “Kuso depicts a series of four surreal vignettes about the mutated survivors of an earthquake that has destroyed Los Angeles.” All 4 vignettes are written by Flying Lotus, with the exception of Mr. Quiggle, which was co written with Zack Fox – and Sock, which was co written with David Firth. All four vignettes are broken up by various scenes of news reporters, animations and a jazz-spoken word performer describing the earthquake, known as “Busdriver”.

Now, let me start off by bragging that I am typically desensitized to most body horror gore. It takes a lot to gross me out. I’m not sure what it was about this film that got to me, but I will admit, IT GOT TO ME. Its fucking GROSS. It’s supposed to be nausea inducing. I appreciate that in a film, because I appreciate extremism. This film definitely pushed the limits of taboo and depravity, because let’s face it, in a post apocalyptic world – this is to be expected. Throwing in some dark comedy is disorienting, because you’re not entirely sure you SHOULD be laughing at the subject matter, because in some social circles, that might label you as, well, disturbed. I don’t mind that label. I laughed as much as I gagged.

So, let’s break down the shorts:
Royal: By far the most disturbing of the three. It’s disgusting. The special effects guy should get a fucking medal. David Firth went to a whole new level with the, um, character (?) that he portrayed. He delivered lines that made me laugh and almost vomit at the same time. I truly enjoyed this short. It was insane. Plus Hannibal Buress is in it. I love that guy. 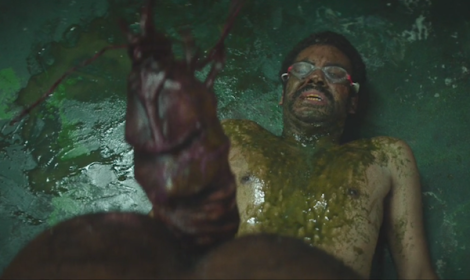 Mr. Quiggle: Oh my fucking gods. This short is hilarious. I didn’t care so much for the main plot line, but I LIVED for George Clinton’s character. The clinic scene, and reveal of who exactly Mr. Quiggle is, is wonderfully entertaining. The Mr. Quiggle song just might be my new ring tone. I loved it. 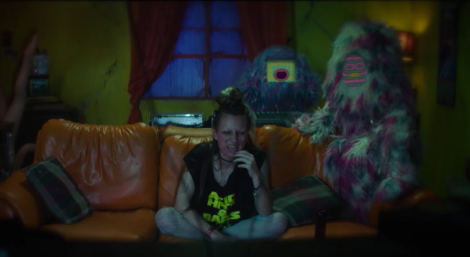 Smear: This is more surrealist horror, which I love. It’s whimsical and absurd at the same time – very fairytale like, with an obvious what the fuck factor to it. While I know it was meant to be a bit comical, I found that this short engaged me more and made me more curious about the earthquake and what brought about this madness, disease and especially the strange creatures. But, in a very Lynchian fashion, it’s completely obscure and offers no explanations. I respect that.
Sock: This short ties into Smear, offering some insight into the strange creature that was first encountered in Smear. The story is quite depressing and a bit anxiety inducing. It was a good change of pace from the hilarity of the other shorts. That’s what I appreciated most about this film, it flitted back and forth from disgusting, to hysterical, to depressing, to disturbing. This was definitely the most depressing short. 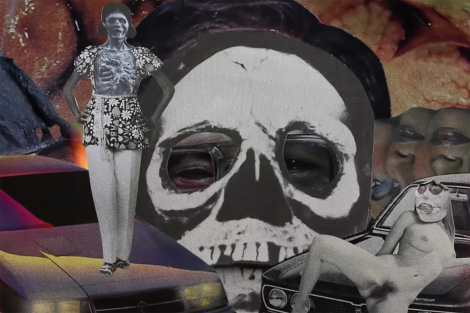 So, to conclude, this film was a fantastical journey through the deranged minds of its creators. It was right up my alley in what I appreciate from the horror world – something you typically only find in Asian horror films. By taking that Asian flavour of horror, and blending it into African American culture – you get this whole new world of dark and disturbing comedy. Plus, the body horror was on point. I thoroughly enjoyed this film and happily add this to my list of favourite cult horror films. I hope these guys make more films, especially ones that tie into this dreamscape.
Give it a try, you might like it, if fucked up hilarious dark comedy disgusting surrealism horror is your thing.
But, keep some dimenhydrinate on hand. You might need it. 5/5