It’s one of those days. Menacing clouds hold domain over the sky and my headphones are screaming for worship of cavernous, all-consuming, darkness.
Accompany me as I venture into the abyss while I take a prolonged listen and leave my honest ponderings on three recent releases.
First up…
The Noctambulant – Advocatus Diaboli
USA
August 2016
Domestic Genocide Records
https://dgrecords.bandcamp.com/

Cover artwork that tosses you unapologetically, tumbling ass over tits, into the genre

Assorted promo materials for this release offer the listener an album with a ‘melodic black’ feel, in truth the album’s style sports influence from many a genre. The opening track Legion displays this aptly spouting rhythm with both a speed metal and death n roll edge, a pleasing heavy drum presence keeps time, with a somewhat punkish manner propelling limbs and digits to prance of their own accord. Guitars often belt out mid-tempo melodies found more in melodic death and traditional heavy metal releases, Dreams of Rotten Silence is a stunning example, but when given a chance the twin guitar assault shreds diabolical as a fan of the black scene would likely expect from the suggestion of the cover’s art.
Eddie Helvette boasts a rasp common to the genre, especially blackened death, a decipherable throat attack that is unusually easy (as compared to other vocalists in the same arena) to understand. Early Witchery material come to mind when listening to several tracks on Advocatus Diaboli. The progression from a slower tempo with an accompanying melody topped with Helvette’s vocal prowess is mainly to blame, though this isn’t in the slightest horrid as the overall style works very well, a respite from the usual black fare and a slight deviation from what I honestly expected.
One track, among many, worthy of praise is Evil Calling. Rolling across the finish line at over seven minutes it’s the longest on the album, epic in tone its aura suggests vintage Moonspell (ironically an act they’ve recently toured with) also an older presence, Bathory. Thick with Gothic emotion and atmosphere this is most likely a track the listener will want to spin again and again. The next track, Goddess, keeps the ante high and traditionalists happy with its rolling rhythms and nod to the better known European scene.

Accept or Burn utilizes a piano introduction for effect which soon progresses into a fast-paced gallop that gets the blood pumping. A representative slice of an album that offers a damn sight more than one might expect. Ranging from traditional black, melodic death, touches of pagan folk and at times atmospherically Gothic with other genre nods thrown in for good measure this is an album many fans from across the metal spectrum can sink their teeth into and should keep an ear out for.
Outstanding for a first full length, this release suggests immensity to follow, perhaps a style that’s yet to be honed although I for one shall enjoy the journey that the bands future holds.
8.5/10 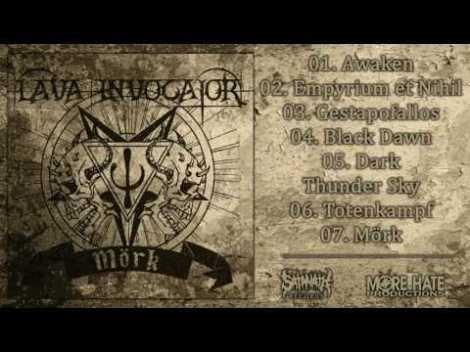 Goblin esque synth (fans of eighties cult Italian horror rejoice!) opens this album. A mite strange, rather different, for a release in this genre but it leads nicely into the second track, Empyrium Et Nihil, with use of a blistering pace. Only three minutes in and I’m already impressed. The drums complement the ferocity of the guitars and the vocals are spat with confidence. The riffing frequently changes, undulates, as if on tracks on midwestern plains, rather than utilizing the age old tried and true galloping formula many believe is merely for speeds sake.
The third track includes rhythms that suggest a dark punk influence as it briskly moves towards its climax blanketed in diabolical texture and tone more than a little Morbid Angel in style.
The next tracks title, Black Dawn, I’ll admit had me a little excited as I thought it a cover of a rare Grave (legends, in my opinion, of the Swedish death scene) track that leaves me with a sore neck every time it graces my ears. Alas it isn’t. It is however, an epic track spanning a range of emotion and styles that showcases the bands talent, composing brilliance and only makes me appreciate the diversity of the album even more.
Dark Thunder Sky is a highpoint of the album, excellent atmosphere and shifting melodies take the listener away to a landscape drenched in feudal conflict, shrouded in ancient mystery. In truth ‘light’ black metal, to be honest because of its melodic stance, but such an outstanding opus I believe that hardly anyone will hold it against the band. Besides which Totenkampft will only dislodge any thoughts from being uttered as one can’t help but let it whisk them away to destroy-everythings-ville with its opening Bolt Thrower like stanza assault.
The album ends with the title track. Atmosphere and dark stabbing riff brutality collide very effectively, this is the icing on the cake if you will. An album I will spin whenever I get the chance to. I’m left in shock, this is another example of a stunning first full length effort, from an act with very little history from the Ukraine of all places which only proves that the influence of metal goes far and wide spawning genius in the furthest reaches of the globe.
In my conclusion, bravo doesn’t go far enough, this is an excellent example of the infusion of new talent in the genre boasting a style that’s easily consumable, one that nudges the genres boundaries while keeping true to traditions without sparking complaint in the slightest.
9.5/10

A damn scary winged vagina belly beast if ever there was one!
The history of The Sarcophagus is a tad rocky, with a slew of previous members choosing precedence with side projects. However, this release shows no signs of ‘casting’ trouble behind the scenes, in fact Beyond This World’s Illusion shines with commendable production values, professionalism, expertise and musical prowess. Rhythms shift on a frequent and often unexpected basis to portray emotion, atmosphere and depth. The ‘Sticksmanship’ (drumming) employed within this album is stunning, perfect in the overall mix, the likes of which rarely heard with such precision outside of the grindcore/technical death arena.
Reign of Chaos is first track to caress the ears, a perfect introduction to the uniqueness of The Sarchophagus’. Melodies ranging from a galloping mid pace to silly (snapping wrist) speed accompany menacing undertones encapsulated within structures hinting at old school death (Hypocrisy and The Abyss) and traditional black influence.
Armoured Death is a fantastic example of the varied riff attacks and style utilized to retain listeners interest. The style here straddles death and black borders, a homage to a vintage style employing chugging riffs, sweeping majestic melodies and exciting chords plucked at hyper speeds.
A standout is one of the shortest tracks on the album, Triumphant Divine Terror, especially if you enjoy the battery of rolling thunder drums surrounded by a Viking/Pagan vibe. An amazing track very melodic in nature recalling legends of the scene; Dissection (RIP Jon Nödtveidt). With just the right amount of evil tossed in to keep purists happy. Just try to keep static to this tune folks!
Sans giving a track by track narrative I’ll finalize this review with a caution, Spin Beyond This World’s Illusion once and you will be hooked. A shining example of the genre albeit with more melody and emphasis on song structure than the surrounding collective.
9/10

I do believe I’m becoming a fan of the one arena of metal I never really cared for in the past, perhaps I never gave it the attention it rightfully demands. All in all three releases all deserved of shelling out your hard-earned cash for.