Resident Evil 4 is hands down the best game of the entire series. If you disagree with me, then you are wrong and also probably a Chris Redfield fan. Chris “have you seen my sister Claire?” Redfield has nothing compared to Leon S. Kennedy the floppy haired angel with the best high-kick in the game. I remember RE 4 when it first came out on Gamecube. My boyfriend at the time took back all his recycling and had enough money to buy a gamecube and a copy of RE4 which is equal parts admirable and depressing. So we hunkered down on the couch and shot European villagers in the face for the next several hours.

The plot is pure action horror. The president’s daughter is kidnapped and brought to a mysterious European country by nefarious evil men hell-bent on taking over the world. So naturally you send in a guy who managed to survive an onslaught of zombies (on his first day on the job no less!) It’s super goofy, and I love it.

Before we get into the guts of this thing (see what I did there) I need to get this out of the way: What is Ashley wearing. Sis. Are you serious? You’re the president’s daughter and you’re out there rocking this JC Penny mess. It’s shameful. Ashley is absolutely the worst part of the entire game and not just because she has big dumb monkey ears and a bad outfit, its because she represents the most hated of all videogame tropes. The escort mission. Unlike escorting Ellie to the Fireflys in the Last of Us or escorting Elizabeth through Columbia in Bioshock Infinite, Ashley can and will get hurt and often killed in your care. The worst Ellie and Elizabeth did was pop up behind me and startle me, the worst Ashley does is get repeatedly bludgeoned to death by evil villagers. My trick for dealing with Ashley was just making her sit in various barrels until I killed as many enemies as I could and then I would whistle for her dumbass and she would join me. I also forgot her in various barrels many, many times.

WHAT ARE THOSE BOOTS???

The plot is extremely confusing and nonsensical. Essentially, an evil cult called the Illuminados kidnap Ashley and inject her with a parasite called Las Plagas with the intention of her infecting her father, which will then allow the Illuminados leader Saddler to take over the world. I mean his plan is going great so far, he managed to take over a disgusting little village full of ugly peasants so I mean, hats off to you my man.

So Leon runs into a lot of stupid villains in this game, right off the bat he has to fight El Gigante which is a huge idiotic looking troll, and then this stupid fish monster, various villagers with pitchforks, these blind idiots with razor hands and of course my most hated enemy of the game: Snakes that come out of boxes that you break open. I hate them. I hate them so much. Despite various snake bites, Leon manages to rescue Ashley pretty early on in the game (that’s good!) but not before he gets kidnapped and injected with Las Plagas (that’s bad!) but shortly after this bad news, they run into the best character of the entire game. Ramon Salazar. I love Salazar. He is ridiculous. He is a tiny little old man that wears a tri corner hat and short pants and does various jigs while threatening Leon’s life. He is so EXTRA and I LOVE IT. he owns this sick castle full of evil cult members, he has a huge cool throne that he sits on, he’s just great. I just love him. I constantly forget Saddler is the main enemy of the game because Salazar really steals the show. And my heart. Unfortunately all good things must come to an end and Salazar doesn’t last until the end of the game. Sleep now sweet prince. 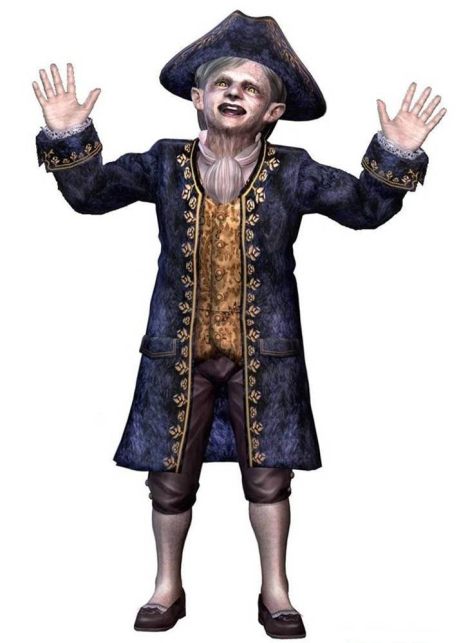 After leaving Salazars party mansion, Leon heads to a nearby Island Research Facility on loan from every action movie from 1980-2000, and he meets up with an old buddy (that’s good!) who then immediately betrays him (that’s bad!) and tries to kill him in order to get a sample of las plagas for Wesker ( oh that Wesker!) but Leon high-kicks him to death and escapes because he is just the best.

The final section of the game is of course a timed escape because it is a Resident Evil game after all, and in possibly the best ending of all time Leon and Ashley escape via a sick seadoo and then Ashley totally tries to hit Leon up. Leon is of course in love with Ada (let me have this) so he turns her down, also her outfit is terrible and someone with such an amazing shearling jacket and cool gloves doesn’t have time for such a poorly dressed individual. I have no idea what they plan to do when the seadoo runs out of gas and they’re in the middle of nowhere, but as long as there’s no snakes hiding in boxes I think they’ll be alright.

If you guys enjoyed this little jaunt down memory lane RE4 HD is available on the PS3, PS4, XBone, And XBone 360 so you can relive all the magic of Ashley shrieking Leons name at full volume.