There’s something that always beckons to me from the bowels of Netflix that urges me to watch absolute garbage for literally no apparent reason.  The thing is, come the end of a difficult day…  the last thing I want to watch is something complicated.  I like to turn off my brain and stare vacantly at the talking box and if there was ever a metaphor for Netflix, I just wrote one that is perfect.

Finders Keepers, is a made for TV movie that has a one star rating on Netflix.  Allow that to sink in for a while.

Pro tip – if you’ve just smoked a bag of high grade weed, and you’ve had your head nestled into the warm fuzz of some Electric Wizard, always look out for those one star Netflix treats.  They’re gentle special angels that will hold you like the arms of a lover.

Yup.  This gem of a film was thrown away into the bowels of Netflix one star ratings, only to be viewed by lunatics like myself, and I guess whatever doped up grandma happened to have her TV on when this bastard came on the tube.

This movie is about a haunted doll that made a little boy kill his whole family and then a police officer, who for whatever reason despite years of training was not able to fend off a six year old. I mean, kid strength is a thing, but come on..  how tall are six year olds?  three feet tall?  Get the fuck out of here.

Couldn’t you just face push one of them and be done with the whole thing?  One wrong word from timmy and he’s face down in a plateful of pancakes trying to breathe through the maple syrup.

Some stupid family led by a divorced Mom with a fucked up haircut moves her sad eyed daughter into the house and is not (surprise!) told by her realtor that a murder happened in the house.  Her daughter finds this creepy ass doll that I would have immediately incinerated or run over with a car and the kid gets all fucked up about it and starts acting possessed, ends up possessed, and basically every creepy baby, haunted house, scary kid, Amityville esque trope ever written, gets trotted out by Z list actors with zero acting skills.

A good quarter of the movie is spent by the mom with a pretty severe haircut rolling around town consulting with a child psychologist played by Jigsaw from the Saw franchise, so it’s good to see that he’s really gone places with his career and found out that in fact no one wants to play a game with him.  The price is wrong, bitch.

This movie really goes for a shit and the divorced parents are conveniently reunited during the exorcism of their child..  how adorable.

Also some random bitch catches on fire while nothing else around her is on fire, so you really should check it out..  It’s worth the watch for a few cheap laughs.  But I mean, it is true that a chubby person would burn more readily than someone else.  Fat is after all flammable.  One time, a local lady witch lit her cape on fire during a “ritual” and ended up burning to death. True story.

This flick didn’t really warrant a full review, because in order for me to write a full review, I would need to have a full film to review…  I really feel like this movie was brought up in committee and they had about ten minutes of source material and just kinda went with it. 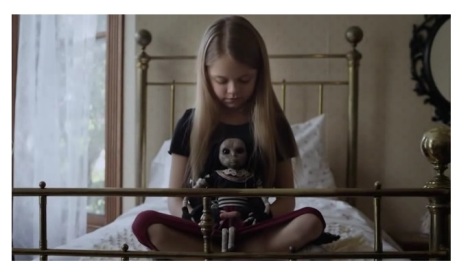 So remember kids, don’t play with creepy ass dolls and always stay spooky.  See ya next time, ya fucks.