I’m a big fan of old-school horror comics from the ‘70s – Eerie, Creepy, Nightmare- put any of them in front of my face and I’m a happy camper. It wasn’t an era I lived through, but one I regardless experienced at that formative point in my life that would help dictate my life-long interests. Along with silver age superhero comics, I would always pick up a handful (or more accurately, as many as mom and dad would allow) of these old magazines from one particular, seemingly endless thrift store that was on the highway to my grandparents house. That place  was also shaped like a castle so imagine how wild my ten year old imagination ran with that! 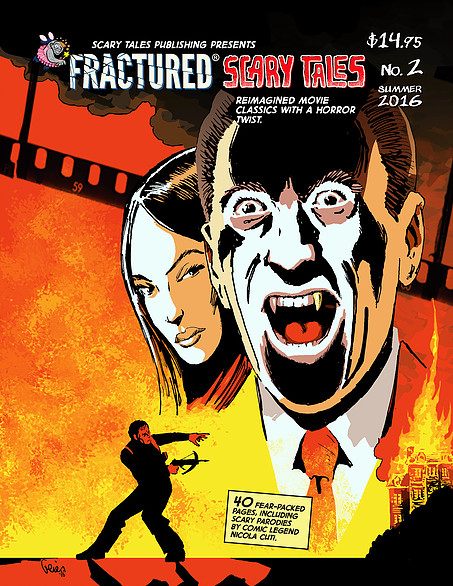 “Fractured Scary Tales” feels like a call back to the above mentioned Warren-era horror comic magazines, except here each story combines a horror element with a fairly well known story or movie. Think “Pride and Prejudice and Zombies” except shorter and much more digestible. Essentially, something I actually want to put in front of my face. Mash-up’s don’t get a whole ton of mileage from me, mostly because they tend to be book length. No thanks. Five to ten pages though? I’m totally in and you should be too, because this book is a pretty fun for a horror-leaning comic. 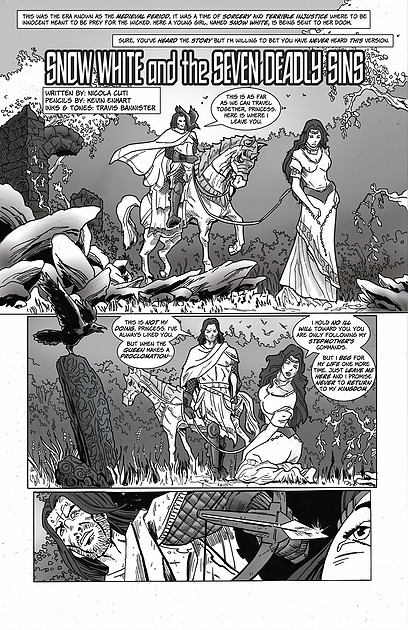 The artwork here doesn’t quite live up to the old Warren comics, but in the case of stories like“Mutant on the Bounty” and “The Man With The Golden Fang” it gets damn close. That isn’t saying it doesn’t convey the stories being told well (it’s up to the task,) but the line work tends to lean more towards a modern style. This isn’t a blood and guts kind of book, the stories trending more towards the fantastic and humorous as opposed to the blood-soaked but not everything can be “Crossed” or “Zombie” can it?One omission I did find find a little odd  was the lack of a master of ceremonies or host. You know – Uncle Creepy, Cousin Eerie, The Cryptkeeper and his cadre – all great horror comic mags have and (almost) need a mascot character. I find they really tie the whole assembly together and present it as a cohesive whole instead of just a collection of stories.

At its best, “Fractured Scary Tales” manages to tell some pulpy and entertaining stories that emulate those Warren magazine pages of yore with some solid art. At it’s worst, well, it’s still not too bad: you get some so-so stories with art that doesn’t quite scratch that  horror magazine itch. These stories are thankfully over fairly quickly and easily pushed to the back of your mind once the next successful one reveals itself with the turn of a page. Order a copy directly from their website(there might even be some lower than usual prices going on right now), and check out some of the other weird stuff they have going on.

One response to “Fractured Scary Tales #2”