Drunk in a Graveyard’s inaugural trip to the Sled Island festival in Calgary was a busy one.  No one on our team had been to Calgary before, and as I wrote in our previous posting about overnighting in Banff, we had some deep thoughts while making our way to Sled Island.

Getting to Calgary was easy.  The drive was long, of course, but surprisingly, Calgary is much easier to navigate while driving than Vancouver.  The drivers in Calgary do not drive anywhere near as aggressively or dangerously as the ones in Vancity and that’s a good thing.  It actually made for a nice change from shooting shows in Vancouver and dealing with the pre-show stress of actually getting around in a city full of people who probably shouldn’t get behind the wheel of a car.

This isn’t to say that Calgary does not have its issues – any city has issues, and I will touch on those particular issues a bit more later.

We picked up the media pass for DIAG and after awkwardly trying to explain what DIAG actually was to the girl who gave us the pass (WE ARE SPOOPY OKAY..  ), we made our way to a swanky ass hotel/condo and set about tying one on in preparation for the HEALTH gig at Dickens.  Wandering along 17th avenue downtown and finding this little neighborhood had cornered the market on cool one off shops and delicious eateries was pretty fucking legit.

I ended up getting embarassingly drunk at 3:30pm at the Ship and Anchor, so if you are reading this and happened to be my waitress, I am so sorry.  Please pray for me, I am not well.  Since I generally do not like to shoot shows intoxicated, I endeavoured to sober up slightly before heading to the Dickens pub to shoot HEALTH.

Like I’ve mentioned before in my Top 6 Picks for Sled Island 2016 posting, HEALTH is one of those bands that seems to defy a lot of musical pigeonholing and as such, there was an extremely varied crowd present at the HEALTH gig.

Walking to the gig, which is a luxury not often afforded when I shoot shows in Vancouver, we came across a group of hipster types wearing plush alien backpacks dropping ecstasy outside the show.  It was 9:20pm.  The sun was still up.  Party foul.

And there is a reason why I am mentioning this, so keep reading.

Old Girl was the opener we walked in on, and I wasn’t sure immediately how to feel about the set.  I liked the minimalist experimental vibe that permeated the music, and I really enjoyed the offbeat vocals.  I wasn’t sold entirely on the visual backdrop and at points the singer seemed to be having sound difficulties, but she did pull through and I ended up really digging the set come the end of it.  I always enjoy shooting shows where the artist seems to be into their own art and the photos I took of Old Girl really convey to me what her set was about. 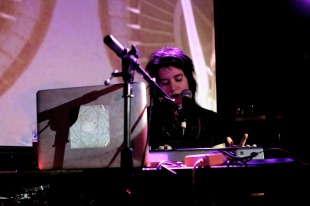 Now, I’d mentioned previously in my Top 6 Picks for Sled Island 2016 about my affection for the artist called Born in Flamez, who was curated specifically by Peaches for Sled Island 2016.  Born in Flamez is a dimunitive soul, thin and genderless, but the power behind this artist was seriously legendary.  I think that big things often come from little people, and Born in Flamez really made that obvious.  The set was short, of course, but it had people dancing, moving, and the music was very emotional.  I think I enjoy the concept of this artist so much because in a time when we are defined by our self brand and brand recognition, to conceal your face is something of a revolutionary act.  And yeah, I know a lot of people may disagree, and you can.  KISS did it.  Slipknot did it.  Ghost does it.  But those artists have used concealment differently.  The concept with Born in Flamez conceals both identity and biological gender and focuses instead on the music.

I think I related to this because in most of my self portraits or photographs wherein I use my own body, rarely will you see my face.  I do not like having my photograph taken, and not for some odd Machiavellian reasoning where in I’m trying to garner sympathy, or think I’m ugly and wish to be told otherwise.  I think the the face is not so necessary.  What I look like should matter little to you.  If my writing or my photographs move you, then that should be enough.  Further to this point, I will say right now that Sled Island festival is a highly fashion forward and highly fashion conscious festival, as was evidenced by much of the posturing and clothing choices observed in the attendees.  I was reminded several times during this event that I was something of a “square” since I wasn’t dressed to the nines with a fresh dye job.  With this in mind, the message of Born in Flamez stands out even further.

I really resonate with this artist, and look forward to seeing and hearing more from them in the future.

HEALTH finished out the night and I have to say that in between speaking with John, the bass player and having a great conversation (keep watching DIAG for the full interview), and their literal mind fuck of a set, I was even more intensely impressed with their music.

I have to mention here as well because I saw it happened.  A member of HEALTH (and I won’t say which one) was wandering in the crowd and an attendee had a fangirl moment and began screaming in this person’s face.

Guys.  Pro tip from someone who has hung out with a lot of celebrities and “rock stars”..  don’t scream when you see them.  It’s weird and oddly frightening.  Especially if you’d like to have a good experience with them.  Thanking someone for making art or music you listen to is a great way to start a conversation, and further still just be friendly.  They are just people.

Now.. back to the kids taking ecstasy outside..  What I noticed a lot of during the HEALTH set was people who couldn’t handle their dose and had on some serious bass face and were in the process of experiencing an OD.

I watched two separate attendees pass out from standing and hit the floor hard.  I checked on the one attendee and it was clear from his pupil size that he had imbibed a little too hard on some chemicals and was in need of some attention, possibly some air and definitely some water, which I got for this person.

Despite being a music photographer by night, I’m still a working professional by day, and I was somewhat shocked that there wasn’t first aid attendants present to help these individuals who clearly needed support.

I mentioned this previously in my show report for Housecore Horror Festival, and this may just be a BC thing, but where I’m from and the festivals I have attended, harm reduction is not only important but also essential.  I got the impression that the staff at the Dickens pub were prepped to handle rowdy drunks but not so much with chemical issues.  I think being mindful of this in the future for Sled Island events where chemical drug use can be predicted, a first aid staffer should be present.  My concern here would be that someone passes out from standing, like the young man I helped, hits their head resulting in serious injury, and you’ve got major problems..

So for Sled Island 2017 I think implementing staff like this would be entirely helpful.

But again, thats just my outside province observation.  I don’t think anyone deserves to be hospitalized for having a good time.

And with that in mind, back to HEALTH.

I’ve seen it written that HEALTH are an act that metalheads should listen to, and I would agree.  Their set was loud and energetic, and truthfully the enthusiasm of the whole band was palpable.  This band definitely put a lot of metal artists I have seen lately to shame with such an intense show.  I highly recommend checking out these guys if at all possible.

This wraps up the June 23, 2016 coverage for Sled Island.  Stay tuned to the page for our coverage from June 24, 2016 and for our interview with HEALTH.