Oh fuck.  You guys, I spent the weekend drunk as fuck out at Rigby’s cabin, and in a life made of already entirely questionable decisions, the nature of this visit was also very questionable.  We spent the whole goddamn weekend around a campfire, crushing beers (or in my case ciders), eating hot dogs and fucking around in the woods.  It was a real time.

Oh and the whole time we were quoting Rick and Morty, so that’s really a window into our particular brand of fuckery.

One thing we also did was watch a film called The Veil, produced by none other than Jason Blum under Blumhouse Productions, and this was definitely one of those garbage filmsI referred to earlier in my Hush review from last week.

Look.  Before I fucking get into this thing here, let me say..  Jonestown?  Pun not intended or anything but yeah..  done to death.  Ti West’s The Sacrament was really the magnum opus of Jonestown style documentaries.  We don’t need another.

But since Hollywood’s motto does tend to be, “oh thirty other people made this exact film in the last ten years?  Oh fuck..  let’s get on that.”  Finger on the pulse of the internet and what not.

Before we started watching this, I asked who was in it, and Scotty told me that Jessica Alba was and then proceeded to be offended that she would be in something like this..  Rigby echoed this statement..

Ok.  Let’s be real here, it’s not like her burgeoning career of being in piles of literal steaming human waste like the entirely white remake of The Eye has her keeping busy.  Yeah we all get it, she was in Sin City and everyone wanted to pork her.  Get over it.  Signed everyone else.

Anywho.  This film also does have Lily Rabe from American Horror Story fame in it, and you’d think with two mediocre Hollywood talents that Blumhouse would have been able to congeal some semblance of something, but nope.

God I’m so sick of cults.  We get it.  You like Nikes and arsenic and kool aid.  Seriously.  If you join a cult, you’re an idiot.  There I said it.  You deserve to have your dumb ass end up castrated in a fucking bunker somewhere with poisoned kool aid dribbling down your titties.  Fuck you and fuck these people.

Anyways, Sarah, is of course completely fucked in the head from watching her family and friends die all around her, under the command of the cult leaders Jim Jacobs (I’m rolling my goddamn eyes out of my skull here).  Jessica Alba plays Maggie Price, a young woman whose father was the FBI agent who busted the cult mid suicide ceremony and soon after fucking killed himslf (yeah, no kidding).

So who is this Jim Jacobs might you ask?

None other than Thomas Jane.  You know.  The fucking PUNISHER.  And also the dude from the Mist who was apparently so fucking deaf he couldn’t hear the army rolling up behind his car when he offed his whole family and kid and whatever.

As you can see from the above illustration, he’s grown his hair to his shoulders, bought some aviators and generally seems to have ripped off David Eugene Edwards’s look..  you know the crazy dude from WOVENHAND who rants on stage about Jesus?

Nothing like a little old time religion to get the insanity cooking, am I right folks?

K also.  Thomas Jane spends the majority of this film babbling complete nonsense, dressed head to toe in white linen and let me tell you dear readers, I was ALL ABOUT IT.  Like..  come on over and bring your snake venom, your bible, and please please please bring those foxy ass linen pants.  You’ll need a full range of motion for the greasy shit we can get up to later. 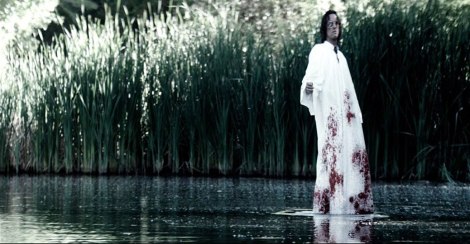 PRAISE THE LORD.  HE IS RISEN

Like all terrible ideas, taking the lone survivor of a fucking death cult back to the place where she lost her family and friends, things quickly take a turn for the worse as the documentary crew begins going missing one by one.

I swear to god, white people are the only ones who would have horrifying/mysterious/occultish shit happen to them at a clearly haunted place and stick around to find out WHAT HAPPENED.  If I went to a spoopy ass spoop spot and spoopy shit started happening, I would burn the place down in self defense and leave. 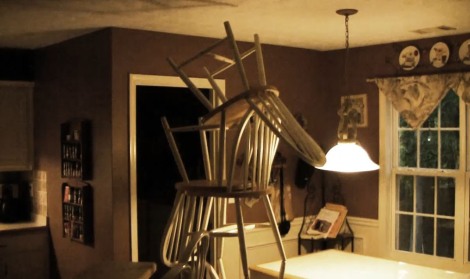 POOTIE  WE GOTTA BURN THIS MUTHA DOWN

If I peeled myself out of my booze coma and found my kitchen looking like this ^^, I would first ask who the hell thought walnut brown was a good idea, and then I would grab a gas can and 100% burn the fucking house down…  hopefully with people in it.

I wouldn’t stick around to watch previously unreleased footage of cult members eating snake venom and speaking in tongues while ghostly #creppy shit happens around me.  I’ve got stuff to do and tacos to eat and I don’t need to be fucking around with occult nonsense.

Anyways, given that things are clearly going to end badly, Sarah starts having ghostly visions and as the footage shows that this Jim Jones..  er..  Jim Jacobs character was an alchemist of some variety who invented designer drugs to liberate the souls of his flock..  of sheeple..

Turns out the big twist is that Jim Jones..  Jacobs..  Jim Jacobs intended to poison his goof troop and then revive them with an antidote, but when the FBI burst in and interrupted the suicide/not suicide, they fucked the whole thing up and everyone ended up dying rather than..  not dying.  I dunno, the whole thing was pretty convoluted and made no goddamn sense.

Pretty son after, Jim Jones/Jacobs and his brethern rise up and possess the documentary crew, and when the cops arrive they kill the shit out of them, and then possess them too while he blabbers nonsense about taking over the world and/or Jesus, and then of course we are treated to a jump scare right before the credits roll.

Seriously, if anyone needs me, I will be in the corner sawing off my own dick.  This movie was hella bad, and for some reason, possibly the booze and high grade marijuana we were smoking, we completely missed the part about how Jim Jacobs/Jones was supposed to be some linen clad alchemist.  I found this out on wikipedia afterwards..  so…  yeah I dunno what to tell you.

Fuck this movie, and fuck you Jason Blum.  Why you gotta do me like this?  I was so pumped on your name after watching Hush.

Really the only saving grace in this shit pile was that the cult leader did in fact look super babely and you can definitely see the definition of his dong bopping around in his linen pants, so it wasn’t all bad.

One response to “The Veil”