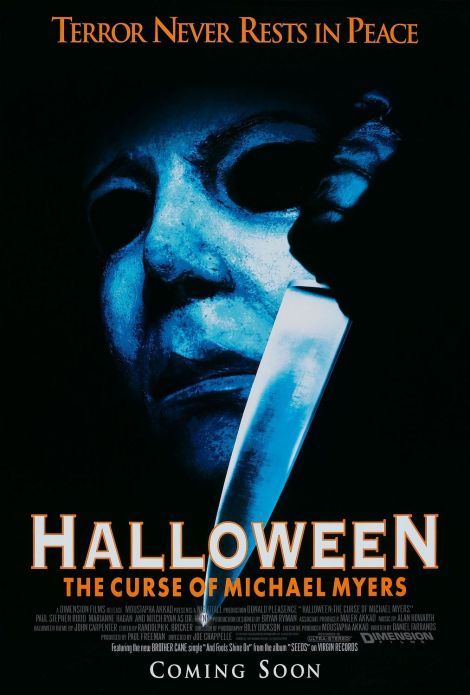 After watching Halloween: Curse of Michael Meyers someone needs to sit me down and explain why exactly everyone thinks Rob Zombie took a dump on the Halloween legacy. Curse, for those who don’t wish to waste their time watching another derivative slasher sequel, introduces to the series a cult of druids (who use Norse runes? Psssst, druids didn’t do this) who control Micheal Meyers. So this essentially makes Michael their errand boy, a hitman-for-hire of sorts. You’re telling me that THIS is more respectful to the spirit of the original movie than Zombies admittedly white trash interpretation? I say nay!

Curse starts out in the middle of Jamie Lloyd (Michael’s niece? And here I thought my family gathering were awkward) labor pains, from which she births a child that is to be sacrificed to appease the Cult of Thorn’s (the aforementioned “druids”) bizarre belief system. Essentially, they believe that Michael bears the “Curse of Thorn” and a child of his bloodline must be offered up for sacrifice to appease him. I’m pretty sure anyway because they aren’t super clear about this in the movie itself. My favorite part of this whole mess of a plot line is that Mr. Meyers only appears when the constellation of Thorn is high in the sky which happens to coincide with  Samhain aka Halloween aka the best damn day of the year. I want to see what Mikeys up to for the other 364 days of the year. Is he just hanging out in another dimension, catching up on reading and perfecting his cheesecake recipe? Is he Freddys’ roommate in the dream dimension? Do they have zany, sitcom-esque antics and face problems that resolve nicely in a thirty minute run time? I would pay to see THIS series, screw the rest of the Halloween sequels.

Anyhow, the stars have aligned and the boogeyman has come home yet again. Turns out Tommy Doyle, the kid Laurie was babysitting in the original movie, is all grown up and has developed a twisted obsession with Meyers. Also goth bands as evidenced by the Sisters of Mercy poster in his bedroom. I have a hard time with the age of the actors in this movie, like I do with most horror (or movies in general) from the 90’s. Tommy, Jamie and pretty much everyone that isn’t a parent or a doctor is apparently under the age of 18 but everyone looks at least 25. Did movie makers just not care at this point in Hollywood’s history? Were audiences just blind to the fact that 25 year olds were portraying characters written to be 10 years their junior? I’d like to see the movie where they trot out a 20 year old and try and pass him off as Grandpa Irving, veteran of both great wars. Wait, Prometheus kinda did that didn’t they? Dreams do come true! But I digress…

Tommy’s obsession with the Meyers killings gives him a great excuse to play peeping tom on Debra Strode, the current “teenage” resident of the old Meyers house which he conveniently lives across the street from. Tommy is up late the night before Halloween listening to a Howard Stern style radio show in between bouts of peeping when he hears Jamie Lloyd call into the radio show, screaming in fear about Michael Meyers and shouting for Dr Loomis to come save her. Using his teenage detective skills, he determines where the call was made from and goes there hoping to track down Debra and I guess through her Michael? This plan seems poorly thought out. Instead, he finds a baby (the victim child I mentioned earlier) in a bathroom cabinet.  Doing what any 15 year old boy would do, Tommy immediately takes the child to a hospital and screams at some nurses before running into Dr Loomis.

Pretty much at this point in the movie it all slides somehow even further down the shitter and becomes a mess of awkward killings (the majority of which just seemed to involve Michael pushing his victims into conveniently placed sharp objects) and nonsensical attempts at furthering this Cult of Thorn plot. We end up at a sanitarium where Micheal stalks around, finds a shiny surgical machete (I’d love to be enlightened as to the medical applications of this piece of equipment) and slaughters a room of doctors and nurses while an epileptic seizure inducing strobe light goes off. This scene in particular made me realize how many of the halloween raves I’ve gone to have missed the boat on having a room themed exactly like this scene. It one of the only memorable things about Curse and would probably be pretty cool set to some rocking bass and a head full of chemicals (ed. note – Drunk in a Graveyard in no way endorses the use of party drugs unless of course it’s the only option available). Tommy comes out of somewhere (yes, somewhere. Because who actually cares? Do you?) with a bunch of syringes filled with a green liquid I can only assume is a tranquilizer (this is a party!) and injects Michael with them, just before beating him into unconsciousness with a pipe. The killer dispatched, everyone moves to the safety of outside where Dr Loomis (who’s just kind of been dragged around this whole time like one of the characters demented grandparents. WOULD YOU LIKE SOME PUDDING GRANDPA?!) informs them that he has some unfinished business and heads back into the sanitarium, only to die off screen. This is a terrible way to kill off Donald Pleasence’s character and just another way Curse managed to shit on the franchise.

Long story short, unless you’re a completionist or, like me, realized you’d never seen this movie and are a glutton for punishment, go and watch Carpenters original. Or the 3rd movie. Or even Rob Zombies reboot because it’s way less offensive than this mid-90’s mess of a movie.