I would just like to state that Drunk in a Graveyard does NOT condone Juggalo-ism in any of its forms. This “film” was watched purely for anthropological purposes – Scotty Floronic

It was another average morning around here at the Graveyard, and like so many other mornings, Scotty Floronic and myself were piecing together the forgotten years of our misguided youth and trying to find out where it all went wrong. Personally, I think things really started going sideways for my at about eight years old when I dragged home a dead raven’s corpse I found laying on the road and then tried to use witchcraft to bring it back to life, because I had seen something similar on TV. Now if that isn’t social commentary, I don’t know what is. All youthful attempts at communing with the Devil aside (Anton Lavey would be so proud), I really took an odd turn (comparitively) at about 13 when I became obsessed with the Misfits. And no, not the Danzig-era Misfits, but rather, the Michael Graves-era Misfits. Don’t get me wrong here, nothing wrong with Michael Graves, in fact, I spent many a lonely night furiously plunging my pubescent toilet to grainy printer pictures of the dude.. comes with the territory of being dark and spooky. However, looking back, I don’t really think that a thirteen year old girl should be plunging her toilet to really anyone, let alone a man twice her age, painted up like a skeleton on the regular, and vaguely resembling a scarecrow.. I’m just saying. That said, all that furious teenage masturbation to a skeleton must have really done something to my brain because I would still give it up no questions asked for Papa from Ghost.

a stone fox if ever there was one

Scotty Floronic did not suffer the same Misfits obsessed youth that I did, unless there’s some secret stash of Jerry Only looking fat pictures hidden around here that I’m not aware of. Oh and Michael Graves, if you are for whatever reason reading this.. I am so sorry you had to read about me mucking out my stall to your likeness. Please forgive me. However, Jerry Only, if you are out there reading this, you are in fact what is wrong with the world and you singlehandedly are the reason that punk is dead. If you want to roll over and die of old age please, that would be perfect, because GOD DAMN. 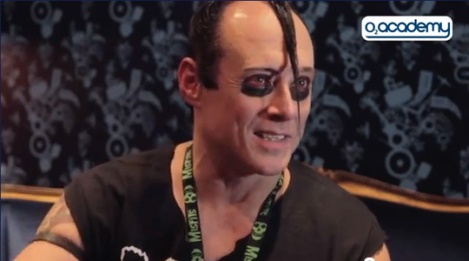 you heard it here first, punk rock is officially over

Anyways, through various twists and turns of strange conversation only appropriate for either a confessional or our breakfast table, I became highly agitated and began waxing moronic about the Misfits appearance in the Insane Clown Posse movie, “Big Money Hustlas”, a cinematic gem, that for whatever reason (probably good taste and decensy), Scotty Floronic had not seen. I declared to our cat that we had to find a copy and drunkenly watch it.

Fast forward literally less than 24 hours later and Scotty Floronic had the juggalo gods smile down upon him when he found a battered copy of Big Money Hustlas at a Value Village. Serendipity it would seem. I’m actually not making this up. I just dropped some actual and entirely legit science on you, my hapless readers.
We found the Insane Clown Posse movie at Value Village, again I’m sure because some well meaning Mom was cleaning up her juggalo kid’s room and had to be rid of it.
For the entirely acceptable price of $1.99, we sealed our fates and decided that we had to get turbo-drunk and undertake a review. 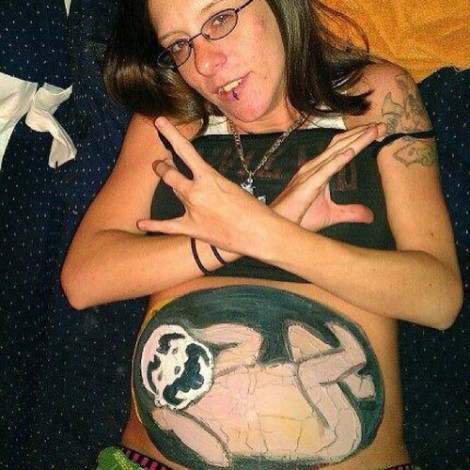 Allow me to say right now that I take 100% culpability for this misadventure. Now, let’s be clear here – the Misfits are quite literally in this piece of shit for roughly 90 seconds, and they don’t actually speak. It’s a very small role, and likely because they were busy eating the donuts they were paid in.

Now, Big Money Hustlas is a movie made by and starring the Insane Clown Posse, and if you happen to be a person of higher taste (and what the fuck are you doing on a blog called Drunk in a Graveyard) and have never heard of ICP and are not in fact DOWN WITH THE CLOWN (can I get a whoop-whoop?), allow me to explain to you the inner complexities of ICP…
..er.. So far, actually, all I know about ICP is that they’re from Detroit, they dress like clowns, rap about some pretty next level shit {if your definition of “next level shit” is in fact Faygo and not understanding the laws of magnetic attraction, then yes, this is next level – Scotty.}, and their fans refer to themselves as Juggalos/Juggalettes. I don’t really understand them or their following much past that, possibly because I have some higher education, beyond say Grade 9. Or possibly, because I am not in fact DOWN WITH THE CLOWN (can I get a whoop-whoop?). Anyways, being obsessed with the Misfits seems like a wholesome obsession in comparison to being a fan of ICP.

Actually, scratch that.. I just watched the video for Dig Up Her Bones and I’m pretty sure someone handed Graves a couple tabs of LSD and told him to go play in the cemetery and then they filmed it. If you don’t believe me, go watch for yourself and tell me otherwise. 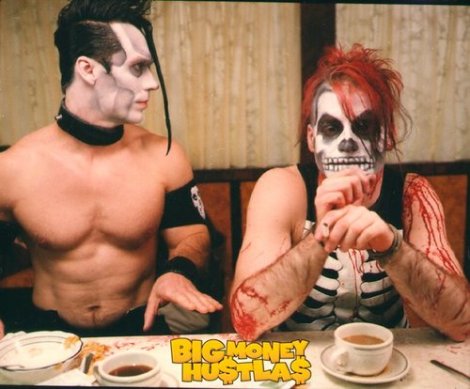 Okay so.. all Misfits and being down with the clown (can I get a whoop-whoop?) aside, for whatever sick reason, my total hottie-snark friend Rigby (http://rigsamarole.wordpress.com/) and I have this.. let’s call it, fairly intense fascination with ICP and with juggalos. We wish to understand them, to understand their ways (so if you are a juggalo that would care to educate us and can type without using chatspeak, please send an email to drunkinagraveyard@outlook.com), and this has basically degenerated into us posting semi-offensive pictures of Juggalos and their annual “Gathering of the Juggalos” festival to each other on facebook. Neither of us is really doing well, at this point, so I took one for the team and for whatever reason did a live tweet of Big Money Hustlas.. In my darkest hour I turned to twitter for help in my never ending quest to understand the Juggalos, and man, if you ever want to clear a room or lose twitter followers like fruit flies in an aquarium full of frogs, then just start tweeting about juggalos because holy fuck.. I lost around 15 followers that night. A dark time.
Truth be told, just go on twitter and tweet about how much Insidious sucked donkey balls and you’ll get so much butthurt.. I no longer think twitter is a viable form of communication beyond tweeting cat pictures anymore.

Regardless, if you did happen to miss said scintillating live-tweet, you didn’t really miss too much. I actually got so drunk partway through that I might have fallen asleep, but regardless, join me now and we can try to unravel the neverending miracle of what it means to be DOWN WITH THE CLOWN (can I get a whoop-whoop?) 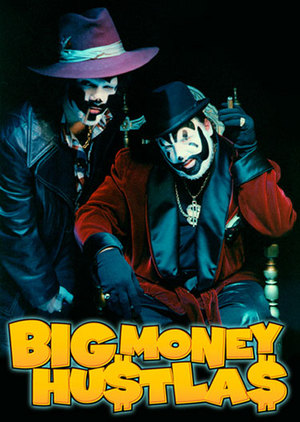 This movie IS a COMEDY (I mean, come on, they’re clowns), and it pays homage to 1970s exploitation films. It opens up with streetwise San Francisco detective Sugar Bear (played by ICP’s Shaggy 2 Dope) being transferred to New York City to help take down crime lord Big Baby Sweets (played by Violent J). I won’t say I really understood much more of the plot than this, or even if there was much more to understand. I did understand that aside from Harland Williams playing Detective Harry Cox, and cameos from both Mick Foley and the Misfits, the entire movie seemed to be staffed by either members of the Insane Clown Posse or Twiztid. 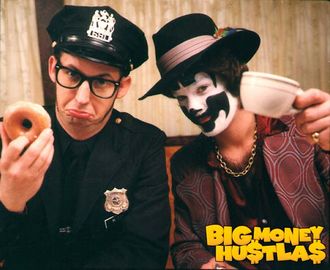 Harland Williams, who is actually pretty funny in this flick, is a dumb ass cop more obsessed with donuts and strange accents than actually busting criminals and it is his bumbling that has cost the city its upper hand in the war on crime. Big Baby Sweets and his henchmen, Lil Poot and Big Stank basically run the joint with violence, drugs, and other criminal activity.
Sugar Bear, dressed to kill and oddly looking strangely fuckable even with the clown makeup vows to clean up the streets, but not before starting a whirlwind relationship with a 300lb stripper named Missy.

Now, I wasn’t sure during my watching of this flick if the ICP is actually CELEBRATING fat chicks and being chubby chasers, or MAKING FUN of fat chicks or what. I wasn’t entirely sure so I didn’t know really how that very odd sex scene made me feel other than dead inside.

^^ However, GBH is definitely CELEBRATING hefty broads, so take a breather and go listen. ^^

I will admit that I checked out around the time that Sugar Bear started hitting the bottle and came to roughly around the time when Big Baby Sweets gets unmasked as Harry Cox, which makes all kinds of no sense, but regardless, I don’t actually think I missed a whole lot, so no worries there.

I will admit that I’m not sure if I found Big Money Hustlas funny or if I just was just mesmerized or what. I think it all boils down to that phenomenon of where you make fun of something so much and you constantly rip on it that you get this kind of really weird fascination with it and just end up being unable to STOP talking about it?

What do you all think? The jury is still out on this one. Scotty Floronic maintains that Rigby and I are actually juggalettes in denial. 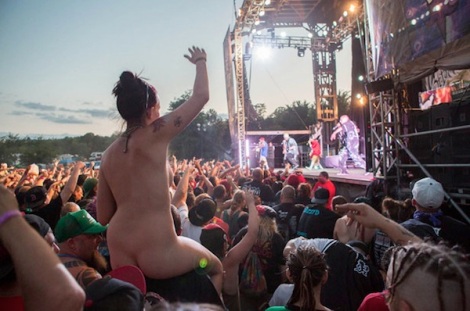 Rigby, how did you get up there, and where are your pants?

Truth be told I actually really REALLY REALLY want to go to the Gathering of Juggalos and do like some undercover Hunter S. Thompson style gonzo-journalism piece on their ways. I am not certain that there would be enough drugs in the world to actually get me there, and there’s a 50/50 chance that if I did get there I would either die there, or I would end up, up a tree having a freak out at the sea of juggalos. Think about it though, if you were on a bunch of crazy drugs and looked out into a sea of clown faces.. isn’t that sort of like mental breakdown material right there?

I think I could do it! Maybe I will start a kickstarter! Kickstarters have been started for worse things I would imagine. 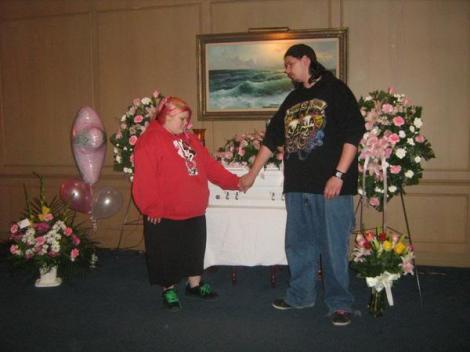 Man, I feel kinda old hat reposting pictures from the juggalo baby funeral, but I still can’t believe that shit happened. I feel like the dead juggalo baby funeral may have actually been the point where I realized there was nothing good left in the world. 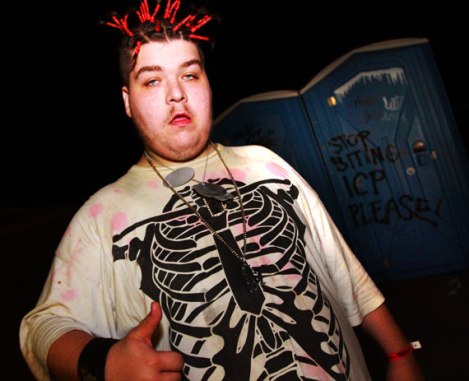 some men just want to see the world burn

I’m not really sure about anything anymore other than the fact that I’m probably going to get a lot of badly spelled chatspeak style hate mail about this one.
Be advised that if you are barely literate and send me some ranting diatribe about your loyalty to the Dark Carnival, I’m going to post the whole thing in its entirety here. We give zero fucks here at the graveyard. You have been warned. 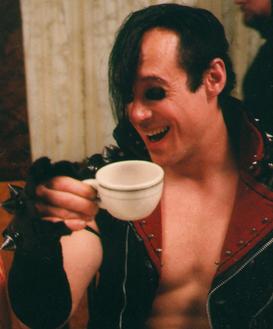 pictured: zero fucks given at the graveyard

I swear I actually have a meaningful and less soul destroying post coming, so stay turned and until next time kids – drink your faygo, stay spooky, and keep believing that magnets work through miracles!